I Roomed with the Gods

How a Virgin Nerd Survived Pledging a Fraternity in the 60s! 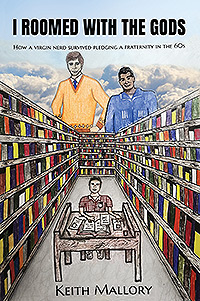 I Roomed with the Gods

How a Virgin Nerd Survived Pledging a Fraternity in the 60s!

My name is Keith Mallory and I started writing this book during the end of my sophomore year in 1963 as a nerdy introverted virgin pledge living in a fraternity house on a major college campus. I didn’t really fit in with the typical “cool” fraternity brothers. But luckily I had two people (my GODs), one another pledge and one a fraternity brother, who were totally different from me, and showed me the way to survive in that fraternity. We shared a room in the ZAP house and because of them I survived and thrived in what could have been hell. The eight handwritten chapters that I wrote in 1963 were lost in the junk that I carried with me after that sophomore year. When I accidentally found those scribbled pages in 2019, during the COVID world, I decided that I needed to complete the fictional story of that stressfully wonderful experience in that fraternity with my two GODs. So as an almost octogenarian, I completed seven more chapters of this book that fictionally described my fraternity life (dating, partying, dancing, drinking, some intense “making out” BUT mostly because of my “ADD”, studying and hiding in the library) as that nerdy pledge in those simpler times. Anyone who’s ever lived in a fraternity house (or even a sorority house) would understand what it might be like to be a nerdy pledge living with all brothers (or sisters) in that house! It could be like a continuous Hell Week! The two GODs that I roomed with at the ZAP fraternity on that college campus worked hard to help me survive being that pledge! To find out if they succeeded, you’ll have to read the book! AND ONLY PROVIDE GOOD REVIEWS OF THE NOVEL! For additional information: Write Keith Mallory at KeithMallory.GodNovel@gmail.com

1944- Graduated Florida University of the North, BS Math 1965 Started writing I Roomed with the Gods in 1963 (first eight chapters as a sophomore), finished writing the last seven chapters in 2021 during the COVID world. I am a one-novel author (although I have written many unpublished poems and short stories). Some of those were written in 1963. And just to finish off this Simple “Nerd” bio, I love movies and my favorite is the 1933 uncut version of King Kong (Sounds like a real nerd!)