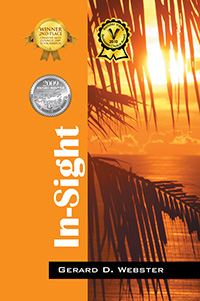 Ward McNulty Had It All!

Ward McNulty had it all: his own syndicated column, the love of a beautiful woman, and powerful friends--including congressional hopeful, Chet Garner. But when Garner convinces him to back the conversion of a sleepy island town into an exclusive resort, it pits Ward against his father in a bitter legal battle. IN-SIGHT is the story of fall, forgiveness, and redemption...of deeply instilled family values triumphing over impossible odds...and of a lost son coming home. It’s for anyone who believes that a Higher Power has a hand in destiny, and is not completely surprised when that Power draws back the curtain for a brief instant and allows a glimpse at another reality.

The services Emma Lee Wheeler performed for "her patients" were certainly corporal ones--cleaning their hospital rooms, mopping the floors, and emptying wastebaskets. But the greater dimension of her service was on the spiritual plane. And she accomplished this most often just by humming her tunes and bringing some level of comfort to the suffering patients. Sometimes. like with Ward, she would talk with them--but quietly. She was sort of a "stealth" missionary--clandestinely imparting wisdom and hope in her homespun, veiled manner. On rare occasions, when no one was watching and a patient asked, she would pray with him. Amazingly, the patients she prayed for seemed to be the ones who recovered the most quickly. Ward wondered if this was just coincidence or if her prayers actually could have some kind of effect on a person's physical well being. He decided one night to perform an experiment. He had a partially selfish motive: that if her prayers held some hidden power, it couldn't hurt to ask her to pray for him. But his greater interest was an educational one. He wanted to know for sure whether prayer was effective--whether God really heard and answered prayers.

So he propped the hand mirror up in his water jug and set it on the swivel hospital table at an angle that allowed him to view his own face. When Emma Lee came on duty that night, Ward was awake and waiting.

"My!" Emma Lee exclaimed when she saw the mirror and how it was aimed. "Ain't you sumpin'! Glory, boy, you ain't that good lookin' to go be admiring yourself."

"Well, actually, I'd rather be admiring you," he teased back. "You're much easier on the eyes. But you move around the room so much that I can't follow you with my head stuck in this halo. So I thought I'd look at the next best thing--me."

Emma Lee eyed him with a mischievous gleam.

"You must be really wantin' sumpin' bad," she accused, "to be goin' on like that. You know it's a sin to lie. So what you up to, anyway?"

"You're right," Ward turned suddenly serious. "I have a favor to ask of you."

Ward observed the shadow of concern fall across her features. She was genuinely worried about him.

"No, nothing's wrong," Ward reassured her and immediately saw relief flash across her face like the sun's light on the earth as it emerges from behind a cloud. "I was just wondering, Emma Lee, if you would do me the favor of praying for me."

Emma Lee's eyes glistened for an instant before she responded. She nodded silently, walked to the door of the room, and closed it.

"I can do bettern' that," she said as she came back to his bed. "He that sings praise, prays twice. Since you like my music so much, I'll sing my prayers to the Lord for you. I don't think no one can hear if I keep it low with the door closed. But I gotta' keep workin' while I do it so I don't get in no trouble."

"That would be fine. Thank you, Emma Lee."

"No, honey. Thank you! I been prayin' for you all along. All your hurts ain't jus' in your body, are they? I've known if for a long time now. So I been prayin' for you anyway, whether you ask me or not. But now that you asked, that makes it more better. That means you ready to receive what the Lord wants to give you. So you jus' relax an' let ol' Emma Lee call down the gifts of the Lord upon you. An' if you wanna' join in, you welcome to. You'll know when to do it."

Gerard Webster has been a Peace Corps volunteer, a soldier, a businessman, and an addictions counselor. Most of all: he’s a husband to his wife, Anne, and a father to their 5 children. He lives with his wife in Jacksonville, Florida.