An Alarming Apocalyptic yet Patriotic Vision of America! 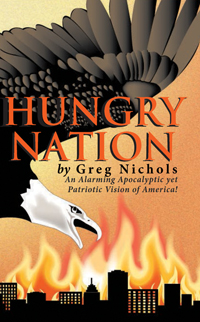 An Alarming Apocalyptic yet Patriotic Vision of America!

Hungry Nation is an edge of your seat, too real, apocalyptic fiction thriller that weaves current events with a revelation of the spiritual battle between good and evil. The main character, Justin Brooks, a political science teacher and well known political columnist, is keenly aware that something menacing is stirring in the country but doesn’t yet realize the importance of his own involvement in a national crisis that is about to change the way all Americans live. Justin, his wife Angie, and his three bodyguards, all retired Navy Seals, find themselves at the brink of a civil war in America and caught in between revolutionary patriots and federal forces. As events unfold, Justin becomes aware of a parallel reality between the spiritual realm and the natural realm, which puts his life on the line. The shocking stand-off between angered patriotic Americans, some of whom are former military, and a governmental, socialistic regime, led by a leftist president, comes all too close to the current fears of Americans everywhere. Justin must rely on prayer and his faith in God for wisdom to understand the true forces at work behind what is seen with the physical eyes. This novel provides an ominous look at the evil that has made its bid to destroy America, but also of the Heavenly and angelic realm that is dispatched to come to its aid. Has America gone too far to come back to God and have one last chance to fulfill her destiny, maintain freedom, and rise out of the ashes? *** For information on a coming prequel and sequel go to hungrynation.net!

About the Author: Greg Nichols is an ordained Christian minister, family man and Bible teacher from Northern California. This novel is based on his teaching ministry. ** From the Author: I wrote Hungry Nation for many reasons, but the main reason is that I desire to see Americans have more interest in their country, government and politics, and the principles and concepts that this great nation was founded upon. I am a fan of George Orwell and his two famous novels, 1984 and Animal Farm. My goal was to use this novel, Hungry Nation, to reveal to this generation how America could quite easily slip into socialism and totalitarianism if its people don’t become aware of what is going on in America; if they have no knowledge of past history in other nations and the mistakes made by those of the past. Many current teen action novels, and the movies adapted from them, use backdrops of police states and regimes, and the young heroes and heroines must overcome great odds under huge oppression. But it may be that those movie watchers and novel fans say, "Not here, not my country, not in America." My intent with Hungry Nation is to show that this could in fact easily happen in America. Through the liberal mindset, many foundations have already been laid in place and unexpected and terrible things could happen very suddenly. The result would be that our old beloved America would be gone forever! We cannot let that happen! Follow Justin Brooks on a path in this novel to greater awareness and then get involved so we can stay a free nation! See how Justin wars with devils who are influencing America and takes God given authority over evil. This novel will change your perception of just what God has called the true Christian Church to do. ** Greg Nichols