Tails & Adventures of a TAILHOOK WARRIOR 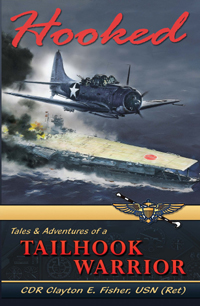 Tails & Adventures of a TAILHOOK WARRIOR

As my vision cleared, the Zero fighter, with its big red "meatball" insignia was flying off my right wing, just like a wingman.

THE PILOT WAS STARING AT ME!

Like a cat with nine lives, CDR Clayton Fisher, a Navy carrier pilot, narrowly escaped death time after time. His love of flying began in childhood, starting with rides in barnstorming biplanes and a blimp, continuing on into the Battle of Midway, where he was a dive bomber pilot during the greatest naval battle in U.S. history. He flew in the initial flight of dive bombers attacking Japanese aircraft carriers in the Battle of Santa Cruz in the South Pacific where his ship, the USS Hornet, was sunk. Later during the Korean War he flew 80 combat bombing missions over North Korea in the famous Corsair fighter off the USS Essex during 1951 and 1952.

Fisher's dramatic tales of life as a flight student, later as a dive bomber and fighter instructor, come to life vividly in HOOKED

After 21 years of naval service, Clayton Fisher retired from the Navy to live in Coronado, California, where he became a successful real estate broker and property developer. He is now fully retired and enjoys spending time with his family.