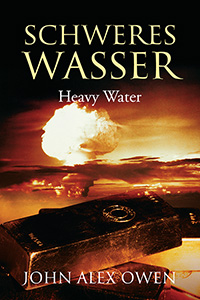 As the Second World War finally grinds to an end, the Nazis are desperate to hide assets and information that the Allies might use to their advantage. All of the Allies know that the Germans were developing the atom bomb, but no one knows the exact nature of their research or exactly how far it went. Coming out of the rubble of post-war Berlin are strong indications that a hidden cache of atomic weapons research exists and Russia and the United States both want it for themselves. US army intelligence has launched a critical mission to track down Nazi atomic weapon documentation and either retrieve it for the United States or destroy it so the Russians can’t use it. The US needs a special person for this mission: a physicist who can pass as a native East German, who can take care of himself in a dangerous environment, and can interpret highly sensitive scientific research, written in German. Enter Rick Malloy, a man who has no interest in being a hero, but who is called to serve his adopted country. From Cambridge, Massachusetts to Berlin, Rick must follow clues to find Nazi technology while being pursued by the East German secret police and the Russian NKVD. Extensively researched, realistic, and compelling, Schweres Wasser is a vivid portrait of a man facing impossible odds in dangerous circumstances—and finding the best of himself.

John Alex Owen is an avid historian, focusing on the post-WWII and Cold War era. He studied history and earned a BA degree in political science from Dartmouth College. He has traveled extensively over the past 40 years, visiting five continents for work and literary research, to see and experience the places and the people that made history. Mr. Owen has lived most of his adult life in Boston, but has recently returned to Lynchburg, Virginia, his hometown, where he resides with his wife and daughter. You can visit him at https://johnalexowenauthor.com, or at www.outskirtspress.com/heavywater