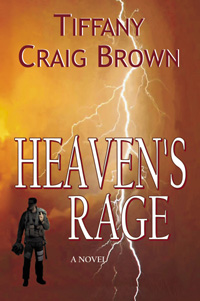 When four women suffer at the hands of one man, the results are deadly!

Heaven’s Rage has the usual components of a mystery novel – the crime of murder, a gruff but loveable protagonist and an assortment of suspects - yet it presents a unique theme as it takes readers back in time to tell the stories of four women who loved one man and who are now suspects in his murder.

Homicide Detective Ian Buchanan is assigned to the murder investigation of Richard Tate, a retired military helicopter pilot. He quickly determines the victim’s three former wives and college girlfriend all had motive and opportunity to commit the crime. As each of these women takes us through her volatile relationship with Tate, the detective finds himself sympathizing with his suspects rather than the victim.

GINA RODRIGUEZ is a career naval officer determined to break through the invisible barriers of a male-dominated military. It’s 1989, and along comes Dick Tate to charm her through a whirlwind romance which leads to an explosive relationship with a drunken and abusive husband.

MEG MCALLISTAR is devoted to her son, but manages to get away one night a week to party at a nearby naval base. During one of those evenings in 1982, she meets the recently-divorced Dick Tate. Two years later they marry. As Dick’s bitter resentment of his first wife grows, Meg is subjected to his frequent fits of rage.

JORDAN CAMPBELL is just completing her Army training when she meets Dick Tate, a young pilot-trainee. Their brief romance is threatened when they each receive orders to opposite sides of the country, prompting them to wed quickly. Shortly thereafter, Jordan discovers she’s pregnant and is discharged from the Army.

COLLEEN MORGAN and Dick Tate are both members of their college swim team. After dating for a couple of months, Dick is becoming serious but his chameleon-like moods trouble her and she decides to end the relationship.

As the daughter of a career military officer, Tiffany Craig Brown spent her early years traveling the world. Some of her first memories include bathing beneath waterfalls in the African Bush. After a brief stint in the Army, she worked in corporate marketing and communications for more than twenty years. Tiffany resides in Sacramento with her husband Tim and is currently working on her next novel.