God, Me and the Blackhorse 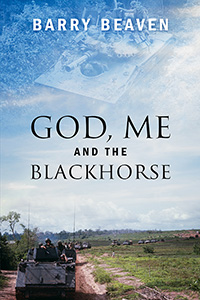 God, Me and the Blackhorse

A Conscientious Objector Goes to Vietnam

As one of six children in a Seventh-day Adventist family, Barry Beaven grew up with deep-rooted faith and ethics. Violence was forbidden: he wasn’t even allowed to play with a squirt gun. A devout Christian who was dedicated to kindness, chastity, and sobriety, Beaven came of age during the Vietnam war and was drafted. His church taught that in times of war, people should serve their country, but not as a combatant. He registered and was accepted as a Conscientious Objector due to his church’s long history of being non-combatants. His stance was supported by the legacy of WWII Seventh-day Adventist Desmond Doss, the hero of Hacksaw Ridge. Like Doss, Beaven served as a medic, first teaching other medics, and then in Vietnam with the 11th Armored Cavalry Regiment, the only independent cavalry regiment in the war. The small regiment shone as an elite force, commanded by the very best, including George Patton’s son.

Alone in the regiment with his faith and convictions, Beaven faced the ultimate question: “Will I have the courage to do my job, or will I be a coward?” His service record gives the answer—Doc Beaven was awarded multiple decorations, including the Purple Heart. Beaven discusses the realities of life and hard choices during the war, with stories of combat and the men who served in the 11th. A story of faith and honor, God, Me and the Black Horse is an honest, compelling memoir of walking with God and finding redemption in unimaginable circumstances.