Stories of Love and Obsession from a Uniquely Gay Perspective 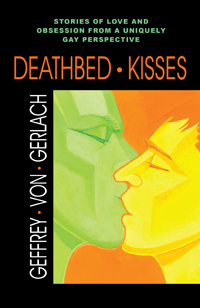 Stories of Love and Obsession from a Uniquely Gay Perspective

DEATHBED KISSES is a collection of uniquely entertaining stories of infatuation and obsession, told with a whimsy and a penchant for the absurd that makes a fun read for anyone, gay or straight, who has ever searched for that elusive thing called love.

• 37 GRAMERCY PARK — The reputation of a celebrated Manhattan man-about-town is put in jeopardy when an amourous classmate from a forgotten life threatens to expose him for the imposter he is. • JAVA JITTERS — An aging lothario attempts to woo a dazzling counter boy at the local coffee shop only to find that he has gone to a lot of trouble for nothing. • UNDER THE HOLLYWOOD SIGN — The mystery of what became of aspiring actress Peggy DeCarlo and why her suitcase had been walled up inside a closet of a Hollywood bungalow for over half a century is finally revealed. • DEATHBED KISSES — A movie buff agrees to tutor a hunky convert to the gay lifestyle, only to find that the line between teacher and lover can blur with both poignant and life-changing consequences. • RULES OF THE GAME — Two middle-aged women, who enjoy a tradition of vacationing together with their philandering husbands, have the last laugh. • M4M — An amusing but unsettling story of a Hollywood hustler who decides to better his lot in life and falls in love with a handsome “straight” client who he is determined to seduce into becoming his husband. • A FABULOUS WOMAN — An alluring woman leads a love-struck young man through the tumultuous streets of the last night of Mardi Gras. But he has his final revenge with an ironic twist that fate alone could provide. • SPOILED WALLPAPER — A young boy develops a crush on the new matinee idol upstairs boarder. In this story of disappointment in love, the boy learns to see with unclouded eyes the value of those who truly care for him. • BEAT THE DEVIL — A lonely man consults a homemade oracle to decide his chances of ensnaring a handsome professor as his significant other. • RULE BRITANNIA — A restless young man collides with a captivating anachronistic old woman who lures him into the world of the glory days of the British Empire and allows him to understand his role as the constant traveler.

ABOUT THE AUTHOR Geffrey von Gerlach has lived in London, New York, Los Angeles and the Netherlands and has spent a lifetime designing and writing for fashion magazines, the record industry and the movie business. 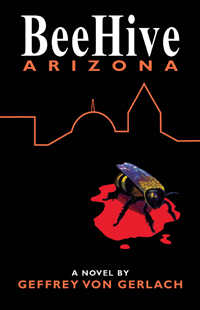