For the first time in the history of the United States, a freestanding Church exists inside a prison. 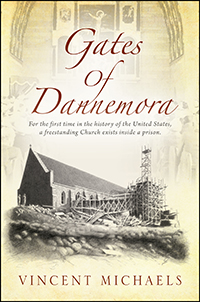 For the first time in the history of the United States, a freestanding Church exists inside a prison.

In 2015, two convicted murderers escaped from maximum security Clinton Prison in Dannemora, New York. After three weeks on the run, one inmate was apprehended — the other shot dead. Gaining nationwide attention, Ben Stiller pitches the idea to Showtime to film a docudrama on the escape, casting Benecio del Toro, Paul Dano, and Patricia Arquette. Stiller’s Emmy-nominated production reached millions of viewers but failed to capture the most intriguing story of Clinton Prison. And that story is —

In the aftermath of the Great Depression, how Clinton’s notorious inmate Charles “Lucky” Luciano, plus the grit of two hundred fellow inmates overcame insurmountable odds to build an 8,000 square foot Gothic Church named: Saint Dismas, the Church of the Good Thief.

Led by the newly assigned Catholic chaplain to Clinton Prison, Father Ambrose Hyland views this audacious endeavor as a way to recast oppressive prison life into a Journey towards hope and renewed life.

GATES OF DANNEMORA delivers in its six parts, short succinct chapters that will become your time capsule, allowing you to experience four triumphant and harrowing years which will make you understand why Saint Dismas is not only a Church, but a National Historic Site.