The Chronicles of Michael Slotery 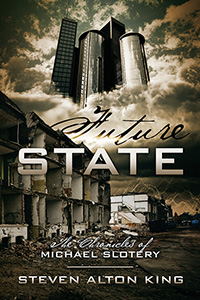 The Chronicles of Michael Slotery

What if the world around you was not as it seemed?

On California’s rugged Big Sur coast, authorities struggle to comprehend the connection between a giant shaft of earth cut from a secluded meadow and a series of bizarre sightings. In the coming weeks a mountain man’s harrowing tale and a trail of mangled bodies leave little doubt that something sinister has descended upon the region. Events spiral out of control as ruthless profiteers, baffled law enforcement and a tenacious news journalist put themselves in the path of incomprehensible danger. Hunted and on the run, only Michael Slotery knows what evil lurks the highlands and how much is at stake. Spanning two centuries, this is the story of the shocking truths uncovered when a community confronts the menacing force that wreaks havoc on their lives; the consequence of a desperate and far-reaching conflict leaving Earth’s last great resource hanging in the balance.

AS HCARS CONTINUED to change the cityscapes, with more and more people living in the lavish upper reaches of the massive 22nd century megalopolises, what remained of the crumbling surface streets and ancient subways became a lawless no man’s land. Here, in the shadows of the giant towers, lived the poor and the unemployed along with the worst criminal element the world had ever known. What were once bustling city sidewalks, quaint shops, and busy subways were now a dark, grimy, nightmarish land of human predator and prey. Most of the privileged in the upper cities and the ultra-wealthy in their lofty penthouses never saw the troubled underclass and were largely unaware of the horrific crimes that occurred in the world far below. 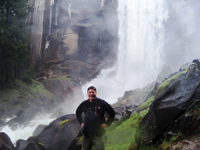 STEVEN ALTON KING was living in Big Sur when he developed the theory behind Future State: The Chronicles of Michael Slotery, a novel inspired by the long history of unexplained events that have taken place there. The area’s remote location with its jagged coastline, dark mountains and dense forests makes the ideal setting for this thought-provoking science fiction thriller.