You Don't Have to be Crazy to Work Here... They'll Train You 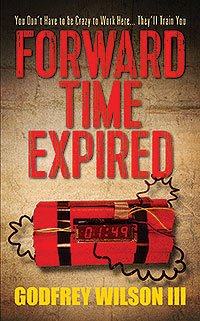 You Don't Have to be Crazy to Work Here... They'll Train You

The truth will set you free.

William Powers is just a regular blue collar guy, trying to clock out at a decent hour and get a day off here and there so that he can squeeze a little enjoyment into this crazy thing called life, and not wind up a complete stranger to his family and friends before his job works him into an early grave. But his line of work and his superiors’ determination to get the best of him might push him to the brink of violence…which is much closer than he—or anyone else—realizes. Then, on one fateful day during the holiday season…in the midst of an overburdening workload, coupled with unreasonable demands for time of completion, his supervisors back him into a corner and he comes out fighting…figuratively, and nearly literally as well. He gets suspended pending an investigation, and while his boss goes in for the kill, the way the union wants him to approach the battle to keep his job seems like second nature to everyone around him, but causes William to do some serious soul searching and ask if it’s all worth it. Forward Time Expired… A story about what a working man has to do to keep his livelihood, dignity, freedom, and sanity intact.

Godfrey Wilson III is a native of St. Louis, Missouri. Born and raised in the inner city, and a graduate of the oldest Black high school west of the Mississippi River (Charles Sumner High). After earning an Associates Degree in CAD, he worked in the mechanical engineering field for fifteen years, and then in management and customer service for the next eleven years. He enjoys bowling, music, and automobiles. He resides in the greater St. Louis area with his wife.