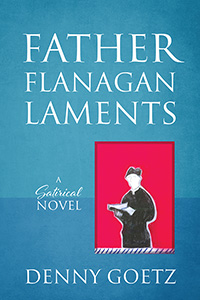 A Satirical Comedic Novel In the Spirit of Rabelais

Meet Father Emery Flanagan, Parish Priest at COHA (Church of the Holy Assumption), torn between his intense love of God and his battles with the intrusive demands of the flesh, and frazzled by the insistent needs of his congregation and the pressures of his churchly duties. Increasingly frantic, he records his riotous daily struggles in letters to his Bishop and in his diary. Here he describes his raucous interactions with a cast of characters ranging from his ancient, wrecked Sexton, who keeps him going with toddies and loyal support, and Emily Claypeter, whom he pursues in unrequited love, to his rigid, reactionary co-Pastor, Reverend Johan Wagner, and his idol and teacher, Father Wilder, a.k.a. “the Cuddle King”. Here too he conveys his visions of himself either sitting beside the Heavenly Throne, or falling into the fiery pit of hell. When Eric Purer, the richest man in town, asks Emery to tutor his lovely daughter, Sally, temptations mount. His life begins to crumble like COHA’s foundation, itself, which church engineers tell him is sinking into the ground. He unravels at an ever increasing pace until one night he finds himself standing naked, holding aloft his ten foot, custom made wooden cross, in COHA’s bell tower, high above the town. In this Rabelaisian satire of religious and sexual mores, we follow the struggles of an all-too-human man of the cloth, as he grapples with his inner demons and the hypocrisies of church and community. With incompatible benevolence to devoutness, heavenly delusions, and carnal folly – inevitable reminders of satirists Mark Twain and Lenny Bruce – author Denny Goetz offers-up an unexpected chronicle, ‘penned’ by an artfully blunt priest. “Father Flanagan Laments” is a meticulous new testament in rhythm and delight. —Richard D. Pepperman author of “Illuminations, Memorable Movie Moments”, finalist for 2011 Best Moving Image Book Award Take a large spoon-full of Joseph Heller, mix in a dash of Gogol and some Kerouac and you’ll emerge with something close to Denny Goetz, whose rollicking new novel will introduce a writer who is going to be much better known in the future, along with his creation, the bewildered but memorable, Father Flanagan. —Martin Jackson author of “American History/American Film” and a nostalgic “History of the Bronx” A well-done story told from a unique perspective. —Richard Monaco author of Pulitzer Prize nominated “Parsival or a Knight’s Tale” COVER ART BY SHERAN SEIF

I know I cannot let fear hold me back. In this instance the very real and justifiable fear that in mid-mass my improvised bandage would fall off and drop to my sandaled feet. Of course I could kick it to lie hidden behind the alter, but an unraveled length of gauze is not so easy to dispose of with a single kick. What if 4, 5 or more kicks were required to push it out of sight? Suppose it became entangled about my slim ankles or in my sandal-straps? And even if the worst did not happen, if I did not trip on its length, if I did not stumble and lie prone on the hallowed floor, my predicament surely would soon be noted. I could hear the carping conversations already: "Did you see Father doing a little dance up there?" and "Isn't he the fancy one!" If only my injury did not sting so, Lord, how I would sing! Is my mind going? It wanders, sometimes, lacking a clear or coherent direction... There, under control. Now I spring a possibly ill-considered little surprise on my congregation. This time, rather than appear before the assembled from my dressing room nook near the alter, as I normally do, I have decided to enter my little Church through our main Portals. With a massive slam of the heavy doors and the consequent reverberating din, my Congregation, startled, turned as though with a single head all the way around to face me. There I stood, my arms raised in generalized blessing, thinking: That's one way to get their attention, Emery. 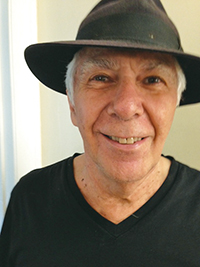 Author Denny Goetz was born in Shanghai to refugee parents from Nazi Germany, and since the age of 10 he has been a resident of NY City. A graduate of CCNY, he has worked in a variety of jobs including as a taxi-driver, a puppeteer, an actor, and a travel agent. He has written a children's play and is working on a memoir of his mother. This is his first published novel.