Far From the Trees

The Troubled Sons of an American Neighborhood 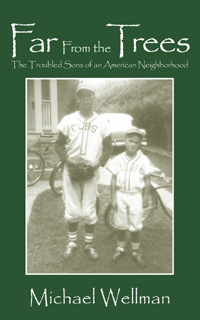 Far From the Trees

The Troubled Sons of an American Neighborhood

Here is an ode to life’s first friendships; a remarkably personal account of coming of age during the cultural earthquake that toppled America’s leaders and opened deep cracks nationwide, even on Kingman Boulevard.

“Far From the Trees…A life story steeped in all things American…an unforgettable read, cover to cover.”

“Far From the Trees contains a potent message. This literary debut reveals promise that will lead to more in the future. Miracles can happen. This book is living proof.”

“Far From the Trees is the story of a triumphant but tragic generation…” written with “tender affection”.

The eight parents whose children romped about our neighborhood in the wild were a formidable bunch. The fathers were gentlemen, doctors, soldiers, churchmen, athletes, coaches and entrepreneurs. Separately and together they were a good example. The mothers were primarily homemakers when that role was still lustrous, but they were also teachers and librarians. They sometimes played bridge together, but the fathers rarely if ever socialized with one another. It was the children that bound us all together.

There was no divorce, no scandal, no abuse of substance or person swept under the group’s rugs that has ever come to my notice. Us kids walked both ways to school and rode our bikes like barefoot, ball capped cowboys in the summertime. We were beckoned home for hot home-cooked suppers by parents hollering out back doors over a comforting ambience of birdsong and the occasional bark of pet dogs that were as unfettered in that place and time as were their child masters.

Parenting that would be negligent and reckless by today’s standards was actually quite affectionate in ways that were easier to feel than they are to explain. We were left to ourselves to contrive and oversee our own recreations, which we managed to do quite nicely, and most of whatever competition sprang up amongst us was neither arranged nor witnessed by our folks. Very little of our constant activity was ever photographed or documented in any fashion. Our uniforms consisted usually of blue jeans, white t-shirts and black sneakers.

Given all that we had in common it seems remarkable now that the first occasion which brought all two dozen members of the four contiguous families to the same place at the same time may have been a funeral. We didn’t barbecue, worship or vacation together. But we did live and learn together in ways that people don’t as much anymore.

Our parents threw us together instead of pitting us vis-a-vis one another. They were providers more than they were orchestrators; ultimately they would become naive enablers. Maybe they left too much to chance. The way they went about raising their families used to be part of the amorphous, laissez faire lifestyle known loosely as, The American Way, which held among other notions that cream rises inexorably to the top. It was more or less equal parts theology and science because it demonstrated faith in what they supposed were divine principles of a natural order.

The new paradigm is a variation of the old Eastern European Olympic model of identifying, segregating and developing potential from early ages. It strikes me as a rather vain and vicarious approach masquerading as good parenting. 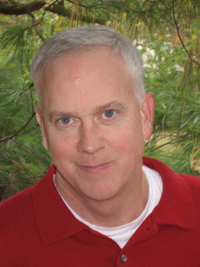 Michael Wellman’s essays have appeared in The Des Moines Register, The Iowan and on Iowa Public Radio. He lives not far from the neighborhood he remembers in this, his first book.

The futility of his chronic allegiance to the Chicago Cubs is made sufferable by more therapeutic ones to his steadfast wife, their three splendid children and two fine dogs.