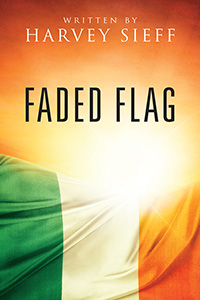 The Greatest Danger in a Life of Rebellion…Is Leaving It

In 1960s Ireland, the “Troubles” wreak havoc over the entire country, terrorizing innocent citizens in both the North and South. Paul Redding, a career supply runner for the Irish Republican Army, has finally had enough of the relentless violence. He is ready to marry his loving girlfriend Jenifer and give up his dangerous and exciting life—but breaking away isn’t so easy. The price of freedom is one last task: finding a defector embedded in an IRA group. He accepts the job, which puts him in the middle of a high-risk, large-scale attack on the British. But as he delves deeper into the operation, he realizes that he is a pawn in a terrifying double-cross, which may destroy him and everything he holds dear. Faded Flag is a fast-paced, richly characterized portrait of everyday heroism and the cost of idealism.

“No man is an island and can live without the love of others and no man can carry within himself all feelings needed to survive.”

Harvey Sieff wrote Faded Flag after leaving Ireland in the early 1970’s when he was in his twenties. It is believed that he wrote this book in its entirety while living in Israel as a volunteer on a kibbutz. Later, he immigrated to the United States where he made several attempts to publish his story, but to no avail. It was published posthumously in his honor.

Faded Flag is a story about a career supply runner for the IRA, an Irishman by the name of Paul Redding and his attempt to break away from the relentless violence that occurred during the 1960’s in Ireland. As he attempts to sever ties with the IRA his actual boss summons him to London for a last order of business. Paul is tasked with finding a defector embedded with an IRA group plotting a high-risk large-scale attack. He accepts the job intent on it being his last before fully committing to a future with his loving girlfriend Jenifer.

During his search, Paul is reminded of his true loyalty and drawn ever closer to the cause and the people who are willing to sacrifice their lives for a liberated Ireland. His ties grow stronger after meeting some of the groups’ men, one of which is an original founding IRA member, the admirable bandleader Terry O’Flatery. The link between his employer and target become increasingly apparent as Paul discovers he may have been used as a pawn in a very dangerous game. In the end, the rebel leaders find themselves on the run for their freedom. Paul’s final goodbye is not as he or the others had planned but ends while he watches the shores of the country he loved so much fade in the distance.

"The author was born and raised in Ireland and grew up in the years when the North went through its bloody reign of terror. He saw the failure of strained yet peaceful coexistence and felt the anger as British troops stood again on Irish soil. He travelled many times to the North of the country visiting members of his family that lived there and saw the suffering and destruction that reigned down on its innocent people. He felt the anger and the pain and finally left Ireland at the age of twenty to settle in Israel. There he lived and worked for five years and felt again the pain of those around him. He then immigrated to the United States where he lived and worked in Michigan and Indiana for the remainder of his life. When he wrote this book in his late twenties after immigrating to the United States, he wrote about his desire to return again to Ireland but refused to bring his children up in his homeland until the terrible destruction ceased and the country united or not was at peace again."