The Re-enslavement of Women and the Death of Modern Music 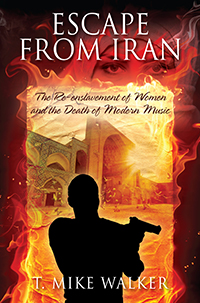 The Re-enslavement of Women and the Death of Modern Music

The last free American in Iran runs for his life with nowhere to hide.

Escape From Iran is just the thing to help you chase those Islamophobic blues away. The adventures of Ara Vartan, a California stoner musician trapped in Iran in the midst of its 1979-80 revolution, will blow your mind. We first encounter Ara in a remote Kurdish Mountain village where he is studying Iranian music. When the revolution comes to the village, Ara runs for his life. On a bus rushing back to the US Embassy in Tehran he meets Kereshmae Nasraddin, a modern Iranian woman on her way to join a counter-revolutionary guerrilla group and demonstrate against the new government. Thrown together by fate, then captured after curfew, they are separated and subject to execution. While waiting for death, Ara encounters his old Berkeley friend, Dr. Mostafa Bazari, a pillar of the revolution, who fights to save their lives. Devilishly plotted, Ara barely gets out of one terrifying episode before he finds himself thrust into another even more mind-boggling event. Before we’re done we have been introduced to many elements of Iranian society which, like a kaleidoscope, helps us to understand so much about the revolution, its necessity, and the hopes and fears of Iranians with regard to it. Escape From Iran is a devastating revelation of how the Iranian revolution was experienced by Iranians of different walks of life. Although fiction, it reveals an unexpectedly complex historical understanding of the period. —Edmund Burke, Emeritus Professor of Middle East History University of California, Santa Cruz 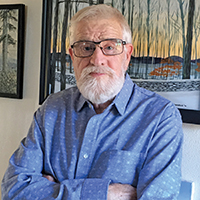 Author, Artist, retired English Instructor, T. Mike Walker grew up in San Francisco and received his MA in Language Arts from San Francisco State University, where he taught Creative Writing from 1963-65. From 1960-62 he worked full time as a San Francisco Policeman. From 1967-1968 he taught High School English in the Haight Ashbury District in San Francisco. From 1965 – 1968 Walker explored making collages and selling them through the Psychedelic Shop on Haight Street. From 1968-1998 Walker taught English full time at Cabrillo Community College in Santa Cruz, CA. Walker published three books based on his experiences: Voices From The Bottom of the World, A Policeman’s Journal (Grove Press, 1970); Respect, Hippy High School in the Summer of Love (Amazon.com, 2004), and The Butterfly Bride and Other Tales from a Wedding Minister (Amazon.com. 2006). After he retired from teaching he returned to creating visual art. He was Board President of the Santa Cruz Art League from 2005-2017. Through all of his changes he has continued painting, making collages, writing, revising, and daring to publish and exhibit his creative work. Learn more on his Outskirts Press webpage: www.outskirtspress.com/escapefromiran or contact him at tmikewalker@gmail.com