A Thelemite’s Magical Journey into the Ultimate Transcendence

A Thelemite’s Magical Journey into the Ultimate Transcendence

Experience a new reality through wondrous visions of the Enochian angels.

Enochian magick, a system of angelic evocation, is one of the most arcane forms of ceremonial magick in the Western world, and perhaps the single most powerful magical system in all occultism. It was developed by the Elizabethan magician Dr. John Dee who, with the assistance of his seer, Edward Kelly, channeled an angelic language and alphabet that is remarkably effective in opening up the mind to currents of intelligence far beyond the human norm.

Whether you are a beginner on your path of study or already an advanced magician, there is something for you in Enochian Initiation. Author Frater W.I.T. shares his own experiences and deeply personal visions, expanding upon and broadening the path toward understanding forged by John Dee, Aleister Crowley, and other great magicians who have come before. By bringing this practice into the modern era, Frater W.I.T. shows how human consciousness can be expanded and examined more closely than with simple meditation, psychoanalysis, or even mind-altering drugs. For those of you who might have hesitated to study Enochian magick because you do not share the same beliefs or convictions of the deeply religious Elizabethans, rest assured that it is possible to achieve the same wondrous results within a neutral spiritual context. Frater W.I.T. has developed a nonreligious spirituality in his conjurations while still using Hebrew and Enochian divine names. Through this book, you too will learn how to develop new techniques and ideas to shape your own magical style and method.

An initiate of both the Masonic and Rosicrucian schools of mystery, Frater W.I.T. has spent more than twenty years studying western occult traditions. The purpose of his life's work is to develop new methods of ceremonial magick and explore new vistas of psychic and spiritual potential.

I have successfully evoked BATAIVAH, King of the East and Air. The way stands open to proceed with the subtler elements as the failure from the first round of Watchtower evocations is now corrected. I've achieved the inner connections missing from my first attempt and now a close relationship with BATAIVAH is established.

As with my previous attempt to commune with the Air King, the vision took the form of an initiation, only this time the title of Hierophant was bestowed on me. I was as a little child as giant, gentle hands purified me by bathing, consecrating me by holding me in a column of smoke from a giant censor, and constituting me as a Hierophant by setting another copy of the symbol of most secret nature in my aura, just as the Jupiter Senior of Air had done. This all took place in a completely dark space, the initiating hands themselves barely more than an outline.

After being prepared in this way, I was handed to the King of Air and he set me in his heart center as a lamen, just as the Hierophant in Aleister Crowley's Thoth tarot deck has in him. I could feel the force lines of the pentagram around me as the power of the Air King flowed through my every nerve and thought. My nervous system scintellated with ecstatic golden light. Then, I felt my own indigo child projection at my heart center glowing as well. The magical alignment that had occurred in the last vision had been reestablished but without the blue-firy hawk image. We were bathed in and penetrated by the golden brilliance.

BATAIVAH then lifted me to sit on the top of his head as a crown and I did the same with my child. The King of Air proclaimed me as a Hierophant of the new aeon, to rule over my own aeon that was my life in the Aeon of Horus. All the Air spirits were commanded to obey me. I was told that the sacred sanctuary that I was now able to enter was the great city of the Watchtowers. The word of entry was love, which is its nature. A secret word was given to me to control my way in the sanctuary/city. Study of its numerical and Qabalistic correspondences would help me understand its significance.

The city suddenly surrounded me, a hyperdimensional place far beyond anything I'd ever seen before. The most complex and bewildering drawings of M. C. Escher were simplistic by comparison. Everything was golden yellow. The walls, stairs, and terraces were all self luminous and in continual movement. The dimensionalities were so complex as to appear continually falling into and through each other. Only this movement could properly express the transcendent nature of the space and time of the city. The scene was like a flower with an unlimited number of petals, constantly blossoming and circulating back to an unseen center. Whole dimensions were defined by particular buildings and streets. Yet, underlying all the frenetic unfoldment was a complete stability, an enduring nature that surpassed the shifting dimensional circulations. All the movement and the root unity thereof were as one simple, perfect harmony. The whole city seemed to sing pure, holistic, complex love.

I called MARDALA, Queen of Air, to witness my invitation to this new level of transcendence and she immediately appeared by my side. She towered over me while radiating a surpassing love that echoed that of the Air city. We stood together and were one with the awe inspiring scene.

I absorbed all I could from this state of being and becoming. My entire nervous system and aura buzzed in sympathy with the awesome vision.

Frater W.I.T. has been involved in the study and practice of the western occult tradition for more than twenty years. He has received initiation in two schools of the mysteries, one Masonic and the other Rosecrucian. The main thrust of his work is to develop new methods of ceremonial magick. 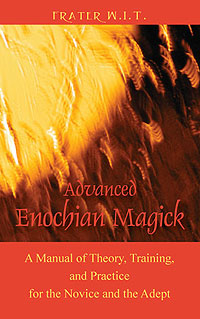