Fictional tales on a ride of twists, turns, and the unexpected 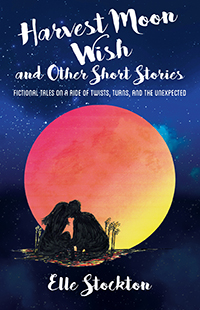 Fictional tales on a ride of twists, turns, and the unexpected

Hitchcockian suspense with an unexpected twist!

A small town’s resident paranormal expert goes missing. The fiancé of a God-fearing, churchgoing woman of means starts choking. A swimmer splashes through hurdles. Two lonely people, living far apart, make a wish upon a brilliant harvest moon. A forty-eight-year-old mechanic has a nervous habit of throwing lit matches on the ground. A landlord falls for her tenant’s low, soft voice. The owner of a roadside diner lives in hock to a surly pawnbroker. A svelte redhead in a black dress and spiked high heels returns a favor in a hospital. A young female finds herself married to someone she doesn’t know. Secrets await discovery in Room 42. A woman attempts to outrun her past by applying for a position as a nanny. The music of a mysterious mandolin player circles the watchtower in a small fishing village. A lithe female draped in a flowing, translucent gown takes a surprising turn in a tango. Traveling with light luggage may prove dangerous to one’s health. Darkness on the mean streets of Southern California transcends to intoxicating love.

Sixty stories of suspense, laughter, love, heartbreak, curiosity, mystery, and magic unfold in Harvest Moon Wish and Other Short Stories. This collection takes the reader into characters’ life experiences, spanning time and continents from birth to death and beyond those boundaries. In the flavor of O. Henry with Alfred Hitchcock’s flair for suspense, readers who enjoy twists, turns, and the unexpected should find these tales engaging, challenging, and enjoyable.

Camille’s past was catching up with her, and she couldn’t run away from it fast enough.  Time was running out, the clock was ticking in her head, and she had just about used up her allotment. Tired of being called every crummy name in the book, she was running toward something, anything, that could validate her life and make it right.


She had shed herself of phony friends, backstabbers, and negative influences like a soaked raincoat with a heavy wool liner left in a puddle in an alley.  Camille’s years of self-soothing at the neighborhood bar, or any bar, had added years to her wrinkled visage and damaged organs, though she kicked the bottle years ago.  Older and sober, it was Camille’s time to come clean.

A svelte redhead smoothed her black dress, clicked down the hallway in spiked high heels, and stopped at Room 24.  She cracked the door open and closed it quietly behind her.  “Hello, Harry,” she said.  “Long time no see.”

An older patient gasped, “Madge, it couldn’t be you.  I thought you were dead.  Besides, you look as young as the day I met you.”

Maurice Hooker, a forty-eight-year-old mechanic oozed oil, grime, and grease from his bald head to underneath his black toenails.  Even the ten-gallon industrial strength cleaner he occasionally used in his outdoor shower couldn’t remove decades of foul low-down living.  For nearly twenty years, Maurice called the lean-to in back of the repair shop his home in Plano, Texas.

Hooker had a pesky habit of throwing lit matches down on the ground, one after another.

Orley never walked, strolled, or sauntered.  He seemed to fly in all directions from the moment his oily, gray shoulder-length hair appeared.  Scraggly brown teeth were in a chaotic tornado, but it was his right yellow glass eye that gave folks the jitters.

Oddly enough, Orley had a bull dog named “Morley” that was said to be just as mean and unkempt as him.  However, Morley had a bone to pick with his owner.  Orley kept that poor dog locked up in a hot garage all year round.

Thad and his dad enjoyed the sound of birds squawking and the sun’s reflection bouncing off the river.  They sat by the river’s edge, drank coffee, and relished their peace of mind.   “Your mom would be proud of you, son, if she could see you all grown.  She always hoped you would take my place as minister someday.”  Hearing his father’s words, Thad smiled and looked off thoughtfully in the distance.

A truck, radio blaring, roared by on the highway, scattering birds everywhere.  Thad’s father looked down, not saying a word.

Mrs. Hilda Solarez normally found her husband by the trail of clothes he left behind.  Shoes, socks, pants, belt, shorts, jacket, shirt, and tie were the graham cracker crumbs leading to the mister.  Upon finding him, she was customarily greeted with a nod and a grunt of acknowledgment while he smoked his pipe.

Long ago Hilda had resigned herself to picking up Mister’s clothes, hanging up his suits and ties, and washing the rest. During their first year of marriage he chided her, “If you don’t like them lying around, pick them up yourself.”  Although she worked longer hours and made more money than her husband, she cleaned the house alone every day, seven days a week. 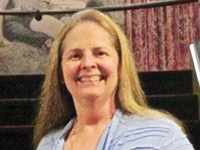 Elle Stockton, a.k.a. Robin B. Stockton, was born in San Francisco and resides with her husband in Southern California. She holds a Master of Fine Arts degree from the University of California, Los Angeles, in motion picture-television writing. This is Elle’s first novel.

Internationally acclaimed for poetry, locally acclaimed for fiction, and the recipient of numerous awards, Elle has had poems published in the National Library of Poetry and the International Library of Poetry anthologies:  Tracing Shadows (“Transitions”), Best Poems of 1998 (“Millennium”), Invoking the Muse (“Slice of Life”), and The Best Poems and Poets of 2004 (“Flower Girl”).