Don't Blame Me If I Got The Name Wrong 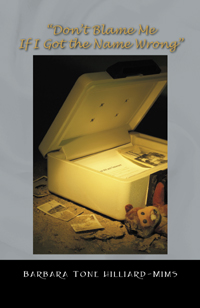 Don't Blame Me If I Got The Name Wrong

A Gentle Reminder to a Generation:

Colored People and Negroes were a special group of people. We have been given many names in the past and our names continue to change. Who we were from times past have changed. Persons that were born in the 1800's, the early 1900's are even referred to as Black or African Americans. Do we wake up the dead Colored People and inform them that they are black, how can that be so? If the historians can't get our names right, "don't blame me if i got the name wrong."
"don't blame me if i got the name wrong, is not a book in colored history, economics, politics nor colored philosophies. This is a book of short humerous stories about a Negro and a Colored girl growing up to be a Black, Afro American, and now an African American Woman as she looks back into her cedar chest of memories, but don't blame me if i got the name wrong.
'It was oh so Scary Times' - The Polio Outbreak in the late forties and the early fifties had the people so scared. The fear of living the rest of our lives in an Iron Lung was oh so scary.
"Americia will be Red or Dead," a threat made by Russia's Prime Minister Nikta Khruscheve. It was a very frightening thing for fourth and fifth graders to hear about a cold war when they did not understand what was the cold war of the 1950's.
Where did the people go that dissapeared in the 'Bermuda Triangle'; like some little girls or boys from Houston Texas in the year of 1951' would be flying in an airplane or cruising on a yatch over the Bremuda Triangle.
The Shadow Knows, Leaky Eye, The Screeking Door, and the Inter-Sanctum" were other o---h s---o scarry times.
Things That Mama Use Said, "Everyday above the ground is a good day." "When God gets ready to bless you; you can pick up a soda water bottle cap and make a million dollars." "Don't ever throw things at a person, always hand it to them." "Everything that God has made need a drink of water."
Children in the Late 40's and early 50's had vivid imaginations that was reflected in their toys, their games, and their play. Bottle Dolls that were made from soda-water bottles and blond rope with popcycles sticks stuffed in the top, were the dolls that we had to play with. Mama could not afford the nice porcelain dolls that were sold in the Woolsworth and the Kress Department Stores. We girls played with jackstones, jump ropes, and mud pies. The boys played marbles, and with other home made toys. We needed to know who was able to spit their watermelon seeds the farthest. Hand-games included; Hambone-Hambone where you been, Oh Mary Mack dressed in black and other hand games were played.
Church was a major factor in our lives. The Church Programs that were presented by the children for Christmas, Easter, Fathers Day and Mothers Day gave us a chance to present our talents to the church and our families. Often the children had more fun behind the scenes than before the people in the pews.
Inspite of the innocent times there were social issues that are still outstanding in the hearts and the minds of Colored and Negroes of the past.
Papa had some things that he said, "a house full of contracptions is a house full of junk."
Older Americans whether they were white, black, brown, yellow, colored, negro, or other races will remember our plight. They will know and some will understand because they were either witnesses, observers or they were the people that lived the life of a Colored or a Negro.
Hopefully the younger people of today will read and obtain an understanding of the past and the his-story of their Colored and Negro grand parents, mothers, aunts, uncles and other people of the times.
Have fun reading as I had fun writing and remembering our his-story.

Barbara Tone Hilliard-Mims lives in Baton Rouge, Louisiana. This is her first book.