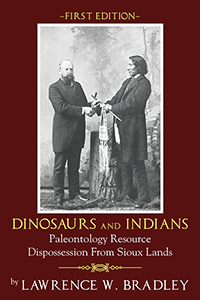 Fossils Collected From Sioux Lands: Who, What, When, & Where.

Along with all manner of European-American immigrants to North America’s Great Plains in the nineteenth century – farmers, miners, gamblers, soldiers, trappers, and many others – came hunters of dinosaur bones. Word had reached some of American archeology’s best-known names that a rich trove of ancient bones lay on Sioux (Lakota, Dakota, and Nakota) land. Paleontologists, including Othniel Charles Marsh (1831-1899), pioneer of American vertebrate paleontology, may have been illegally trespassing while exploring and collecting fossils on Indian lands. The search was on, and soon academic reputations were being built on fossils taken from Native lands and peoples, often without their consent. These fossil-collecting exploits helped build the foundation for the Peabody Museum of Yale University, and others, as the "golden age" of paleontology unfolded using fossil resources taken from Lakota lands and peoples. Lawrence W. Bradley, who was raised by an Oglala Lakota stepfather, brings this story to life from a Native point of view. This is fascinating reading, told the first time, as he calls for “a new concept of physical geography” that “exposes indigenous paleontology resource dispossession and allows paleontology to conscientiously advance into the twenty-first century.” Bruce E. Johansen Jacob J. Isaacson University Research Professor School of Communication and Native American Studies University of Nebraska at Omaha Johansen is the author of The Encyclopedia of the American Indian Movement (Greenwood, 2013), and other works. 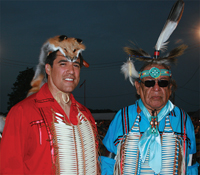 Dr. Lawrence W. Bradley, Adjunct Professor of Geography/Geology at the University of Nebraska at Omaha, may be America's leading expert on vertebrate fossils dispossessed from Native American lands. He was raised by Oglala Lakota since he was two years old and has family history with Indigenous tribes of New Mexico Territory.