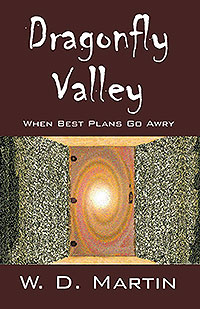 DragonFly Valley is a story of four friends, a small town and an adventure that will forever change their lives. What was once unknown becomes known and this leads to extraordinary discoveries. An old book that is opened points the way. In their possession they have a bizarre key that unlocks a strange door. Where this door leads could cost the life of one of their friends. Join them as they are tested both physically and mentally. The story covers the social interaction of these friends, their parents, and other adults that call DragonFly Valley home.

Chapter 1 A Plan That Went Terribly Wrong Ted George was resting after the accident. After making sure his dad had everything he needed, Sam George left in search for food. He had his faithful Ol’ Betsy with him. It was his favorite gun. His father had taught him to shoot when he was only six years old. He had gotten so proficient that he often went out and hunted for the family food while his father was busy doing other things. Sam just loved getting out by himself. He felt at home in the wild, as long as he had Ol’ Betsy, that is. There was one time that he was walking through the woods and he startled a big black bear. If it wasn’t for Ol’ Betsy, he would have been slashed to pieces by that bear. He was lucky enough to get the shot off as the bear came within 10 feet of him. He still had nightmares about that one. He never told his parents but he did learn a valuable lesson. From that day on, whenever he walked in the woods, he stopped every so often to listen to the sounds of the forest. Sam proceeded up the hill that led to the mountains. He carried his lantern in his left hand and his gun in his right, which was ready whenever he needed it. You never knew if there was a snake, mountain lion or bear in the woods. Sam decided he had time, so he went to look at the cave he had found once more before finding game for supper. He remembered that he had to get out of the woods to a clearing that leveled off. If he kept walking towards the mountain that resembled a nag’s head, he only had to walk for another hour. Behind a big boulder, there was an opening to the cave. The mountain was off to the right so that’s where he headed. After an hour’s walk, he started to search for the big boulder. There were many boulders at the base of the mountain but there was only one that was as big as the one he was looking for. It was the size of a small house. As he walked around the back side of it, he noticed the crack in the side of the mountain. ‘Yes,’ he thought, ‘I found the cave entrance.’ He leaned his gun against the boulder just long enough for him to light the lantern. After picking it back up, Sam entered the cave. He lifted the lantern above his head so he could get his bearings. He then proceeded down a tunnel that led off to the right. He remembered that he did not have to walk very far until it opened up into a large cavern. He walked through to the back. Behind the back wall was the opening he sought. He went through the opening and proceeded to walk down the next tunnel. It would not take him long before he saw it. It had a light all its own that seemed to light up the entire end of the tunnel. Sam padded his pocket with the back of his hand to make sure that the strange key was still there. He had found it lying on the cavern floor a foot from the weird door the first time he came upon it. As he approached the door, he noticed how quiet it got. He leaned his gun against the tunnel wall beside the door then reached into his pocket and pulled out the key. He inserted the key in the keyhole and turned it. The door opened. He then took the key out. He started to go through the doorway and was about through when he realized he didn’t have Ol’ Betsy. He quickly reached in and grabbed his gun. As he did, the key slipped out of his hand. Just as he brought his gun though the doorway, the door slammed shut and disappeared. His plan had gone terribly wrong.

W. D. Martin received his BS degree from National University and his Master’s from Colorado Technical University. He retired from the U.S. Navy in 1998 and has recently retired from teaching. He currently lives in Alabama. He and his wife Brenda have been married 35 years and they have three beautiful daughters, 2 granddaughters and 4 grandsons. He enjoys writing and working with technology 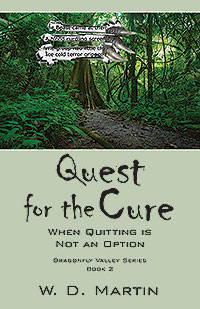