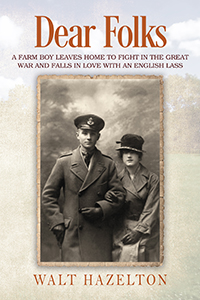 A true story of war and romance.

Raised by devout parents on a Canadian farm, naive 17-year-old Walter enlists in the Canadian Infantry during World War I. After six months of training, his unit is active in the trenches near Ypres, Belgium, where he encounters the horrors of warfare, poison gas, and rat-infested trenches. After being sent back to England to recover from illness, Walter falls in love with an English lass—and the relationship blossoms. They become engaged, but there are obstacles. She has been raised in a low-income community, while Walter’s father is a well-educated, practicing doctor. Amid all the uncertainties of war, the two lovers postpone their marriage and continue to see each other as often as possible. But when the war suddenly ends, Walter is shipped back home—alone. Can their wartime romance survive an ocean of distance? Take a step back into history and experience this true story firsthand through Walter’s letters to his parents. Dear Folks is a warm and wonderful read about youth, love, war, and commitment. “An intimate and compelling portrait of a young man in the throes of both love and war, drawn from his letters home, by his own son.” —Carol Waide Morris

Walt has a degree in Mechanical Engineering from the University of Pennsylvania as well as an MBA from the Wharton School at Penn. He served as an officer in the U.S. Navy between his two degrees. He is now retired from Xerox Corporation and has also worked as a consultant helping companies improve their financial processes. He has published several articles in business magazines as well as a book describing a unique approach to winning at Texas Hold-em.