Daddy, Tell Me a Story About When You Were Little

(A rotten kid grew up to be a pediatrician) 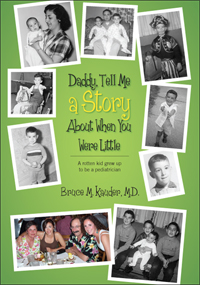 Daddy, Tell Me a Story About When You Were Little

(A rotten kid grew up to be a pediatrician)

Cancer, with a fifty percent chance of being dead in 15 to 36 months. That was the news that I got in October of 2006, and I was only 53 years old. Over just a few days, I went from speed-of-light active to zero. My career as a pediatrician ended three days after I realized I was ill. After the initial shock of hearing the diagnosis and likelihood of survival, my thoughts all turned to my family. Was everything organized enough for my wife to take over my family jobs? Would we have any money now, since I had no job? Would I be alive to see my youngest daughter graduate from college? What would my oldest daughter do in New York City, where she was just beginning her first job after college? Had I told everybody all the things I had always meant to tell them? Would I be able to get all my “lists” done before I died?

I survived two different regimens of chemotherapy, and attended the graduation one week after the final treatment. My organizational skills were legend, and my wife was set to take over. Money would be okay. My lists were completed. My New York daughter quit her job and moved back, into a teaching job that had just opened. I had an autologous stem-cell bone marrow transplant, my only chance of survival, in August of 2007. About a month after my transplant, my daughters came to babysit for me. I could not be left alone, since I could not care for myself. While they were there, I realized that, although I had told them all the things I had meant to say, they would probably forget all the stories I had told them when they were young.

“Daddy, tell me a story about when you were little,” kept repeating in my head. It was what they said to me many evenings at bedtime, so that I would tell them the things I did as a child. Back when parents just sent us out to play, without knowing what we were doing or where we were. I played in dangerous places and did dangerous and rotten things. My parents probably thought I would grow up to be some sort of terrible criminal. My daughters were fascinated.

So, in October of 2007, I decided to write down all of my bedtime stories, hopefully getting the job done before I died. It is now April of 2009, and I am not dead. I am cancer-free, at least by any testing that looks for disease recurrence. I finally have finished writing all of the stories that I can remember — all 224 of them. I am writing this book only for two people, my daughters, so I only need two copies. If anybody else finds enjoyment, humor, or astonishment in my stories, it will make me smile. A rotten kid grew up to be a pediatrician.

It is such a different world now. The regular kids’ life of the ‘50s and ‘60s seems like a fantasy world. I think part of my kids’ fascination with my stories is that they really can’t think of me as a child, doing irresponsible or naughty things. They can’t think of me as being bad. The very idea that I managed to do some of the things I did is just inconceivable to them.

All of the stories that follow are how I remember them, not how they actually occurred. I am certain that my mother would tell you a completely different version of each story. Although her versions may be closer to the truth, I like my versions better. Mine are colored by the perspective of my age at the time of each event. A five-year-old boy’s view of what happened is very different than his parents’. My versions are also better because they have been retold many times over the years. As with all storytelling, each time a story is told it changes a little bit. Some details are added and some are left out, all to make things more interesting. So, although each of my stories is true, some are the truth in an altered form. I think it is better that way. 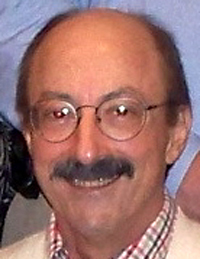 Bruce Kauder is a retired pediatrician living in Yorktown, Virginia, with his wife, René. After his career was cut short by illness at the age of 53, he embarked on completing his life “lists,” especially writing this book for his two daughters, Mara and Rachel.