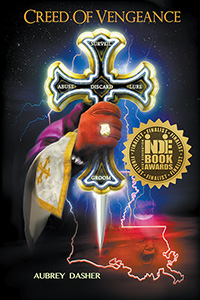 In the parishes of Louisiana, it’s time for a reckoning. For more than two thousand years, children have been at the mercy of pedophile Catholic priests, but a reckoning is on its way in the form of outraged locals who will stop at nothing to avenge their own. Creed of Vengeance takes you on a heart-stopping journey through three generations of abuse victims as Cajun justice emerges out of bayou country, with inescapable and heartless cruelty brought down upon the guilty. LeRóy Garceau, raped in childhood by his priest, and his similarly abused nephew, Remy, lead local vigilantes and outlaw motorcycle club members on a quest for punishment and retribution. With the help of a cadre of brilliant, ruthless Cajun women, LeRóy and Remy’s team chase justice from the parishes and bayous of Louisiana to Angola State Prison, and even to the war-torn streets of Iraq. But a final, unimaginable calling awaits: a confrontation on the astral plane, where a battle of spiritual forces will decide who is liberated and transformed…and who is damned and enslaved for eternity.

Aubrey Dasher spent most of his career in software engineering, creating systems for commercial, civil aviation, and defense applications; he continues to work for a major defense contractor. He enjoys a happy marriage with his wife, Michelle