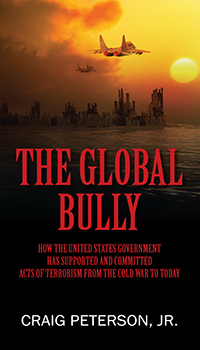 When people think of terrorism today, they often think of radical Islamic groups committing atrocities against the populace. Although these are horrific events, governments are also capable of actions that equate to terrorism, and they usually have more resources available to do so. The United States has become an imperialistic force by bullying other countries and people and requiring submission to its policies. This book is extremely controversial, but it discusses topics that need to be addressed. If Americans want to keep their liberties and see their country viewed more positively in the world, a change of policies is required.

Craig Peterson, Jr. has an interest in political topics, and while serving in the United States Air Force, he began to see things differently and question the policies of the government. He is currently attending the University at Albany, State University of New York and lives in Colonie. You can contact him at cpetersonjr12@theglobalbully.com.