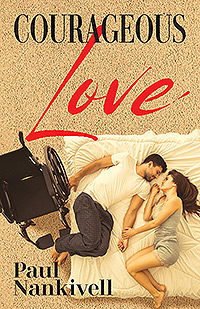 Two protagonists with cerebral palsy overcome their real and imagined obstacles to find true loves they never imagined possible.
Despite his cerebral palsy, Alan Jones has overcome many obstacles in life. As a senior systems analyst at a Fortune-500 company, he makes a great living and owns a generous condo in West Hills.

Alan's attendant Selena Harris lives with Alan but occupies the other bedroom. Despite their chemistry, Alan doesn't believe a woman like Selena would ever be with a man like him.

Meanwhile, Catherine O'Malley has also vanquished many obstacles of cerebral palsy. She's a corporate attorney who defines herself by her career success, but she's starting to have mixed feelings about representing the faceless corporations who ruin innocent lives. Desperate to escape her guilt, she finds herself tempted by a male coworker's intense gaze.

At Catherine's side through her conquests is the pretty and supportive Nicole, who listens to Catherine with a conflicted heart.

In these layered and thoughtful love stories, Alan and Catherine must overcome their imagined obstacles to realize that true love has no limits.

Unlike most people, Alan Jones doesn’t abhor Mondays.  Monday, is the start of a new week.  And, another chance to prove his worth to a society that frowns upon individuals who don’t fit.  And, by no fault of his own, his power wheelchair stands out like an orchid in a rose garden.  Orchids can be beautiful in their own right. But, nobody expects to come across one in a homogeneous field of
roses.
He has worked at P & N Networking Solutions in downtown Los Angeles since graduating college eighteen years ago.  Beginning as a junior programming intern and slowly climbing the ladder to his present position of senior systems analyst.  Now, at age forty, he enjoys the perks of being one of the top analysts in the city.

Paul Nankivell was born with cerebral palsy. He became one of the first differently-abled students to mainstream into public schools in the 1970s. Since graduating from college, he's advocated for disability rights,