Turn It Up! Confessions of a Radio Junkie 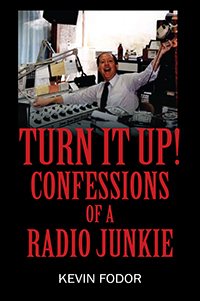 Turn It Up! Confessions of a Radio Junkie

WHAT PEOPLE ARE SAYING… About “Turn It Up! Confessions Of A Radio Junkie!

I first met Kevin Fodor 50 years ago when, as a high school student, he came out to nightly remote broadcasts I was hosting for WAVI Radio. He has gone from voluntarily helping set up and tear down broadcast equipment back then to over-achieving almost every goal he would have had back then. Kevin has done it all, while leading, mentoring and inspiring many, many others. His wisdom and creative brilliance are all on display in these pages. I know you’ll love getting to know my friend, Kevin Fodor thanks to this enlightening and inspiring book.
—Jaye Albright, Retired Broadcasting Consultant for Albright, O’Malley and Brenner Broadcasting Consultants.

Kevin is one of the best friends a radio transmitter ever had…and one of the best weapons a radio programmer can have in his arsenal. He not only KNOWS but LOVES the business of radio and always shows up with 100% to give (no matter what the task) to get the job done. I don’t believe there’s a job inside a radio station that Kevin hasn’t tackled in his long radio career – whether or not he actually held a particular job title. That alone should make this an interesting read. He’s dedicated to a fault because he is passionate about the business. I’m positive that somewhere there’s a marriage certificate that proves he’s been married to radio all these years.
—Former “in the trenches” co-worker and occasional boss – Rob Ellis, Vice President/Owner AQ Productions.

Rowdy (Kevin Fodor) is part of a rare species of broadcasters. He grew up enchanted by legendary Top 40 stations like CKLW, then went on to build a successful radio career for himself and has survived by being versatile enough to handle diverse formats on multiple stations. Can’t wait to read this book!
—Bob Moody, former Country Programming Format Leader for Nationwide Communications and former on air talent at CKLW/Detroit-Windsor (known as “The Big 8”).

Working “in the radio biz” for 43 plus years, I’ve had the pleasure to cross paths and work with Kevin many times. The one word that comes to mind is “versatility”. He truly is a “jack of all trades” when it comes to radio. Even in his role as a broadcast instructor, Kevin brings a depth of experience and perspective that is priceless.
—Tommy Collins, Radio Department Head, International College of Broadcasting; Dayton, Ohio.

Kevin’s long career in Broadcasting created some great stories that anyone who has ever worked in radio can relate to. Kevin has been part of broadcasting dynasties in Ohio and has a unique perspective unlike any other.
—Nick Roberts, Radio Vice President and Marketing Director for Cox Media Group, Dayton, Ohio. 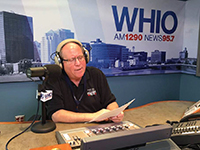 Kevin Fodor is an almost 50 year veteran of the radio broadcasting industry working in small, medium and large cities across the midwestern U.S. He has spent almost 20 years back in his hometown of Dayton, Ohio on air at Cox Media Group's WHIO-AM/FM, WHKO-FM and WZLR-FM. He also substitutes as a radio instructor at the International College of Broadcasting in Dayton.