by Miles Anderson with Bella Merlin 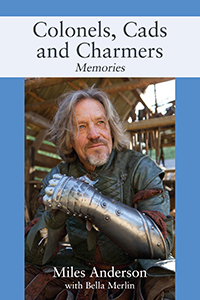 by Miles Anderson with Bella Merlin

A nine-month-old baby is dropped on its head...

...on the floor of a concrete swimming pool. It’s 1948 in Southern Rhodesia. And from the baby’s ensuing convulsions emerges a figure who has become a much-beloved actor of stage and screen. Colonels, Cads and Charmers follows the real-life adventures of Miles Anderson. From his childhood in (now) Zimbabwe (including his father Major General Jock Anderson’s historic dismissal from the army for resisting Ian Smith’s regime) to his award-winning stage career and his popularity on British television. In the African tradition of vivid storytelling, moments of hilarity mix with poignant tales of loss and thoughtful provocations. There are perspectives on acting and insights into the entertainment industry - from the original House of Cards to the ever-popular Soldier Soldier, along with the impactful Cry Freedom and the improbable Sky Bandits. The tales travel the gamut. Talking to a bear in Malaya. Diving from the skies in Singapore. Playing a dog at the Royal Shakespeare Company. Quitting the West End to become a Greek fisherman. Cremating a friend in a hysterical funeral. Each story shimmers with a dramatis personae of charismatic characters - and not a few romances...

from CHAPTER 20: 'Thou Shalt Love Thy Neighbour as Thyself' (Bears n'all!)

It was maybe twelve years later that my brother Colin happened to go back to Kuala Belait on business. And he happened to go to the police station and meet some officials. He knew about my story, so he mentioned it to one of the policemen.
‘Oh, yes, yes, yes!’ the policeman nodded. ‘There was this very strange orang puteh – White man – who came here years ago and spoke to a bear in the jungle. Very strange man. Very special.’ Word had got around that I spoke ‘Honeybear.’
Whenever I tell this story to friends, they don’t quite believe it. They think I'm exaggerating, but absolutely every word of it is true. I once told the story to my actor-friend Clive Russell.
‘Well, I know what your epitaph’s going to be,’ he said.
‘What’s that?’ I asked.
‘Who’s a lion?’ he said, with his mischievous Scottish twinkle.
Yes. ‘Who’s a lion?’ I’ll ask, as I bury my hands in the lion’s mane.
‘Aaaahaw!’ the lion will reply.
And the rest will be history.

Miles Anderson has been acting for over fifty years and is the recipient of several British and American awards. Trained at the Royal Academy of Dramatic Art, he also directs and teaches actors. He lives in Los Angeles with his wife Bella Merlin. www.milesanderson.us
Bella Merlin is an actor, singer-songwriter and professor of acting at the University of California, Riverside. She is the author of seven books on acting including The Complete Stanislavsky Toolkit. www.bellamerlin.com