Treasures From The Attic 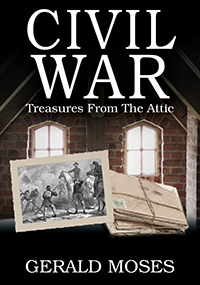 Treasures From The Attic

A group of young men from Illinois trooped to Leavenworth, Kansas in September of 1861 to join a Union Cavalry regiment. There was no hint at the outset that the 7th Kansas Volunteer Cavalry would quickly become one of the more notorious regiments of the Civil War, the Kansas Jayhawkers. Webster W. Moses, a young teacher, was among the 85 from Wyanet, Illinois, who formed Company D of the 7th Kansas Volunteer Cavalry. The regiment began raiding and plundering and killing “Secesh” sympathizers in Missouri. Soon Washington was threatening to disband the regiment, or send it west to control Indian tribes. It settled on removing the regimental commander and sending the regiment into western Tennessee and northern Mississippi to combat Confederate forces there. Webster kept a journal during the war and penned letters to Nancy Mowry, a young Quaker girl who had been one of his students in Wyanet. He married her in the final year of the war. Those letters were saved by the young bride. A son, Francis, found the letters in the attic of her farmhouse in Minnesota after Nancy’s death in 1942. He deposited them with the Kansas State Historical Society. This personal record of the war in the western states remains as fresh as letters from a battlefield today, written within days of events rather than after delays that often dull recollection. The 7th Kansas Cavalry experienced hardship and sickness and tedium, winter snow and stifling summer heat as it patrolled the western states. It joined other Union regiments to fight pitched battles against Confederate forces. The troopers of Company D were mustered out at Leavenworth in September, 1865.

“Gen. McNeil’s Brigade at last got in the advance and made another saber charge of about five miles on a dead run, but our horses were so exhausted from lack of feed and fatigue that we could overtake but a few who fell victim to our sabers. None were taken prisoner by the 7th Kansas. “We followed until night and camped on the prairie in line of battle. All day we were on a smooth prairie. Both armies were in full sight of each other. The sight was the prettiest I ever saw. My horse gave out before night and I could move only at a slow walk.” This was W. W. Moses’ description of the battle at the Osage River in Missouri on Oct.23, 1864. in his journal, included in "Civil War Treasures from the Attic.",

Gerald Moses Jr. is a great-grandson of Webster Moses. He is a retired journalist. He was a wire service correspondent for four years, then was a newspaper reporter and editor in Baton Rouge, Louisiana for 30 years. In retirement, he located Webster’s letters and journal while researching his family’s genealogy. He served with the First Marine Division in Korea in 1951.