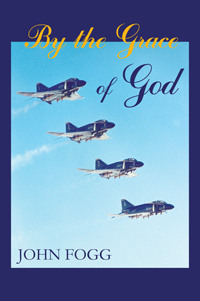 STORIES OF SURVIVAL AND SPIRITUAL REBIRTH

By the Grace of God, chronicles the life experiences of the author which on several occasions, could have resulted in his death. He assumed his survival was as a result of luck or skill or a combination of both until the mid-1990’s, when a spiritual reality began to unfold in his life. Ultimately, his spiritual rebirth led him to the Bible which came to life within the context of his newborn spiritual awareness. In the book, he describes a personal relationship with God through Jesus Christ that is both touching and inspirational. He believes that relationship is freely available to all that open their hearts and minds to that possibility. The author’s hope is that readers who believe in God will have their faith strengthened and those who don’t, will open their minds and hearts to the peace and love that comes with a personal relationship with Jesus. Divine intervention happens!

JOHN FOGG served as a Marine Corps fighter pilot for 20 years and in that time, he flew 200 combat air missions in Viet Nam, was selected as a demonstration pilot with the Blue Angels, graduated from the Navy Fighter Weapons School, Top Gun, and served as the Commanding Officer of VMFA 122, a Marine Corps Fighter Squadron. Upon his retirement from the Corps, he was elected to the Pensacola, Florida, City Council where he served as a District Representative, At-Large Representative and Mayor for nearly 20 years. Upon completion of his last term as Mayor, he had served as the Mayor for over 14 years, longer than anyone in the City’s history. In 2001, Mayor Fogg became the first elected Mayor of Pensacola since 1913 and was designated Mayor Emeritus in 2009. He holds an undergraduate degree in Psychology from Butler University and a Master of Public Administration degree from Troy University. John and his wife, Pat, will celebrate their 40th anniversary in 2014.