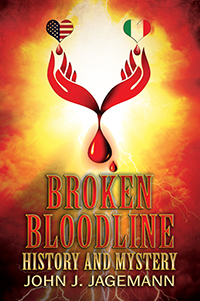 “The Godfather II” meets “The Boys from Brazil”

Woven deeply into the backdrop of U.S. history, Broken Bloodline animates the trials and tribulations beginning with turn-of-the-century Italian immigrants as depicted by the fictitious Scallaci Family experienced in pursuit of the elusive American dream. Although the Scallaci journey officially began in 1893, our plot encompasses the mounting uncertainties of the early 1900s, persecutions suffered amidst the 1910s, decadence embodied during the 1920s, deprivation endured throughout the 1930s, brutalities inflicted within the bellicose 1940s, ascensions achieved during the booming 1950s and tumult born of the 1960s.

Broken Bloodline is narrated by anti-hero protagonist, eighteen-year-old Pasquale Patsy Scallaci as he recounts the family odyssey as conveyed to him by his paternal grandfather, Pasquale. As the storyline unfolds, we are offered a bird’s eye view of Patsy’s transition from the uncertainties of youth to the confidence of manhood achieved and life-direction realized.

Your story begins in the Bronx. This book opens during the summer of 1969, but storyline venues seamlessly transition to Italy, New York City, Vietnam, the Adirondacks in upstate NY, France, Germany, etc. Our narrative provides an insider’s perspective into the joys and difficulties of cultural integration.

Secondarily, an underlying “whodunnit” subplot unveils a tale of serial murder, intrigue and resurrection from the abyss of an uncertainty shrouded in mystery to the jubilance of recognizing a self-worth built upon the backbone of ancestry and buttressed by the foundation of family loyalty. It is the trail of the Broken Bloodline.