Inspired by a True Event. 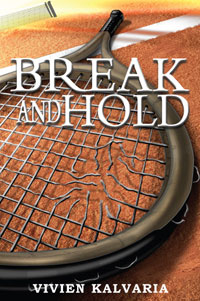 Inspired by a True Event.

Inspired by a True Event

“Superbly written. Beautifully captures the extraordinary pressures of junior tennis and the tragic consequences of parents who lose their way. A terrific contribution. This is a must read for every tennis parent.”
Jim Loehr, Ed.D.
Chairman & CEO, Human Performance Institute

BREAK AND HOLD
Inspired by a True Event

Against a seething backdrop of tennis academies, star athletes and ubiquitous parents, three individuals emerge harboring a dark secret. Pulling no punches, Vivien Kalvaria faithfully delivers the raw truths of life in this microcosmic world where elite players travel in packs for months at a time competing in tournaments across the globe. Delving beneath the surface, the story covers the genesis and journey of a gifted player while exposing the complexities and emotional struggles that beset parents and coaches in the grooming of teen athletes and the seductive elements that drive a father to mastermind a diabolical scheme. The book moves at a crackling pace with lavish descriptions of knockdown-dragout matches as the story slipstreams from the relentless crafting of champions, to a tour of European tournaments and an astonishing revelation that impels a family toward a very public trial and shattering climax.

Tears were flowing now, and a wretchedness gripped him. He stopped, shifted the racquet bag onto the other shoulder, then trudged on. He cast about in his mind, reliving the match, resurrecting missed opportunities, the unforced errors, the poor shot selection, the unforgiving heat. And the cramping. It began in the third set. It was downhill after that. I should have played the short court more. He was caving in the second set. His legs were gone. I could have finished him in two.
He recalled his father’s fury, words raining on him, cutting him to the quick. As if the loss wasn’t bad enough. Sobs exploded in his chest.
There was that awful moment when he knew it was over. He was serving. Five-four in the third. Forty-fifteen. The match had been a messy see-saw of sprayed balls, double-faults and endless deuces. Now, at last, he had two match points. His eyes had cut over to the bleachers. The seat was empty. His father gone. Left in a fury. Disgusted.
An old, familiar, sick feeling of abandonment engulfed him as he fought back the tears pricking his eyes, swallowing the acrid fear cresting in his throat.
Why now Papa? It’s not over yet.
The sound of retching from an adjacent court filtered through his dulled senses as the sun beat down mercilessly. Players had been dropping like flies, vomiting on court, cramping, and defaulting in record numbers.
Soaring temperatures had sent tennis officials scrambling for umbrellas and water coolers to put courtside. Rockville Pike was in the grip of a heatwave. Newspapers trumpeted headlines: Maryland Sizzles. The Mother Of Them All.
I’m dying out here Papa. Why can’t you understand how hard it is to play in this heat? I’m cramping, my shorts are wet, stuck to my thighs, but I’m grinding it out. Doesn’t that count for something? I’m two points from a win. And you just get up and leave?
The rest was a fast-forward haze. Jumbled emotions, while the troublesome shadow of his father’s anger hung menacingly sentinel, contaminating his efforts to close the match. Reaching deep, he struggled to shake the hollow ache that he would disappoint him again. No matter what. Win or lose.
Then, someone, someone’s father, had put his arm around him. “You played real well Nick. Don’t be disappointed with this loss. You were the better player by a long chalk. He just came through on the big points.”
He had limped over to the shade of a tree, his calf threatening to seize again, and sat down.
When he looked up, the figure of his father loomed grotesquely, the muscle in his cheek convulsing in rage. His heart began to thump like a jack rabbit’s.
Standing over him, cold fury lacing each word, his father spoke through clenched teeth. “Estupido! I spit on your tennis!”

VIVIEN KALVARIA was born in Zimbabwe, where, after obtaining a Licentiate from the Trinity College of London, she taught Communication and Drama. She was later appointed television director of a weekend news program before moving to South Africa where she established her own drama studio. Later the family immigrated to the United States where her daughter developed into a top ranked tennis player. 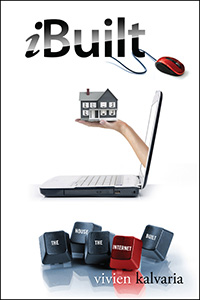