Gay-Lesbian Identity, Relationships, and Marriage: Homosexuality, the Bible, and the Battle for Chaste Love 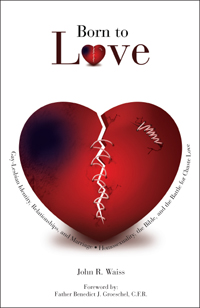 Gay-Lesbian Identity, Relationships, and Marriage: Homosexuality, the Bible, and the Battle for Chaste Love

THE TRUTH ABOUT HOMOSEXUALITY IS

In a truly loving manner, Fr. John Waiss tackles the major issues on homosexual attraction and relationships — what the Bible says… the Catholic Church says… what science says… etc. — facing head-on the difficult challenges put to Christians, such as:

Is it a sin to be born gay? Is homosexuality an “intrinsic disorder”?

Born to Love offers HOPE for developing a solid, peace-filled personal identity based on relationships — not sexual attraction —applying Pope John Paul II’s personalism and Theology of the Body to present the full Christian teaching in an attractive manner.

Right on the mark! It hits all the important points, theologically and scientifically. It is an important contribution to the literature— clarifying Catholic natural law teachings and also weaving in the contributions of empirical science and psychodynamic psychology. That is so much needed.

I think your book has the potential to be THE BOOK used in seminaries and in priestly formation… [and] a major resource for Catholics with same-sex-attraction, as well as families, teachers, etc.

This is a book for people who have hope and for those who need hope… I highly recommend Born to Love for those who are interested in following the teachings of the Gospel.

WWJD: How Would Christ Confront Homosexuality?

Sam: Another friend of mine told me that Jesus said nothing about homosexuality and it was only Paul’s overzealous prudery that made Christians homophobic.

Father JP: Jesus may not have said anything explicit about homosexuality, but he did say quite a bit about sexual morality and the real meaning of human love.

First, as we saw, he reminds us that the all of the law is to be accomplished and not to be relaxed (Matthew 5:17-19). When he comes to dealing with adultery—which was a much more prevalent problem than homosexuality—he raised the bar even higher:

You have heard that it was said, ‘You shall not commit adultery.’ But I say to you that every one who looks at a woman lustfully has already committed adultery with her in his heart.

If your right eye causes you to sin, pluck it out and throw it away; it is better that you lose one of your members than that your whole body be thrown into hell. (Matthew 5:27-29).

So, even lustful thoughts and desires can “kill” the soul’s relationship with God and cause us to go to hell, which is eternal separation from God. Jesus also raises the standard on marriage, condemning divorce (Matthew 5:31-32).

So, do you really think Jesus Christ would lighten the Old Testament teaching against homosexuality? What about sacrificing children to idols, since Jesus said nothing explicit about that? No, from the consistent picture portrayed by the evangelists and from that of early Christian writers and from how Christians put this gospel into practice, it is clear that Christ reaffirmed the Old Testament teaching on homosexuality.

Sam: But do you think Jesus would use the Mosaic Law to condemn a gay man or a lesbian to death, as he condemns divorce?

Father JP: No, Sam. In fact, when Jesus addresses the issues of marriage, he shows that the Mosaic Law on divorce was insufficient:

And Pharisees came up to him and tested him by asking, “Is it lawful to divorce one’s wife for any cause?” He answered, “Have you not read that he who made them from the beginning made them male and female, and said, ‘For this reason a man shall leave his father and mother and be joined to his wife, and the two shall become one flesh’? So they are no longer two but one flesh. What therefore God has joined together, let not man put asunder.”

They said to him, “Why then did Moses command one to give a certificate of divorce, and to put her away?” He said to them, “For your hardness of heart Moses allowed you to divorce your wives, but from the beginning it was not so. And I say to you: whoever divorces his wife, except for unchastity, and marries another, commits adultery; and he who marries a divorced woman, commits adultery” (Matthew 19:3-9).

The Pharisees defended divorce based on the Mosaic Law. But Jesus goes back to the beginning when God formed the first man and woman. The bond of man and woman as they become one flesh in marital intimacy is something sacred, something God has joined together: we must not put it asunder by divorce, or by adultery, or by fornication, or by homosexual acts. That is God’s design for humanity.

Sam: Are you then saying that Jesus condemns gays and lesbians by his authoritative interpretation of Genesis?

Father JP: No, I’m not saying that either.

If we want to know how Jesus would react toward actively homosexual individuals, then let’s read the Bible—with both faith and openness; there I think we can find a wonderful example of what Christ would do.

On one occasion, Jesus was in the Temple and the Scribes and Pharisees brought a woman who had been caught in adultery:

And placing her in the midst they said to him, “Teacher, this woman has been caught in the act of adultery. Now in the law Moses commanded us to stone such. What do you say about her?” This they said to test him… And as they continued to ask him, he stood up and said to them, “Let him who is without sin among you be the first to throw a stone at her.” And once more he bent down… But when they heard it, they went away, one by one, beginning with the eldest, and Jesus was left alone with the woman standing before him. Jesus looked up and said to her, “Woman, where are they? Has no one condemned you?” She said, “No one, Lord.” And Jesus said, “Neither do I condemn you; go, and do not sin again” (John 8:2-11).

I think Jesus would have a similar attitude toward any man or woman “caught” in a homosexual relationship. Jesus would love them. He would offer them his understanding and forgiveness. He would not condemn them to death—spiritual death—but challenge them to go and sin no more.

Jeremy: So, you are saying, JP, that if Our Lord “caught” me in a homosexual relationship and I was being dragged by a bunch of Bible-thumpers to be tortured and killed, he would intervene?

Father JP: I have no question about that: he certainly would.

Jeremy: Would you, JP?

Father JP: I would hope so. As you know, we Christians can be more talk than action when we are hard-pressed to act in defense of someone under attack.

More than risking my life, I am willing to risk my reputation. As you know, gay-bashers have no mercy. Anyone who associates with homosexuals also incurs their wrath; but I am willing to risk this, just as Jesus did, eating and befriending tax collectors, sinners, and harlots (Matthew 9:10-13; 11:19; 21:28-31; Luke 15:1-7).

Jeremy: Then why does the Church condemn us?

Sam: Yeah, JP? Why don’t you tell us why the Church is making a concerted effort to fight against homosexuality and the rights of gays and lesbians to marry?

Father JP: I would like to address that, but we need to take a break. Perhaps we can meet again next week and continue our dialogue.

Jeremy: JP, would you mind if I bring along a friend of mine, BillyLu? She is full of spunk and has a sharp tongue, but I think she would better argue for the gay side than I.

Father JP: If she is willing to have a civil dialogue, then please bring her along. 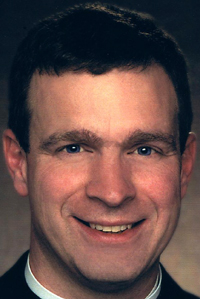 Fr. John R. Waiss has been

and parents for more than

twenty years. He is the

author of Couples in Love

and co-author of Letters

Between a Catholic and