Blood on the Badge 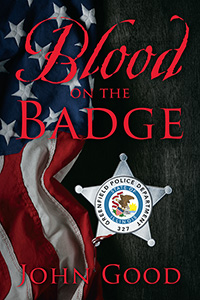 Blood on the Badge

Who is Killing Greenfield Rookie Police Officers and Why?

It’s the year 2016 and decorated Navy Seal Matt O’Neil has moved on to his new career as a police officer with the Greenfield, Illinois, Police Department. For Matt and his wife Kelly, life has never been better. They are buying a home in Morton Grove, Kelly has recently landed her dream job at Lutheran Family Center Hospital, and two Navy Seals who served under Matt’s command are joining him on the Greenfield Police Department.

With only a few months left in Matt’s probation period, his entire world is turned upside down when his best friend on the force is killed while conducting a routine traffic stop. Soon after the death of this Greenfield Officer, a second rookie is found dead in Door County, Wisconsin. Matt takes these deaths personally and all evidence points to the possibility of a serial killer. This information comes with a price. The closer Matt gets to help solving these deaths, the more his life is unraveling. He must make a choice between saving his marriage, his career, or his freedom.

John Good retired in February of 2020, completing a 41-year career combined with two Illinois Police Departments. Mr. Good served in a number of specialized units earning him department commendations and awards. Mr. Good holds a Master of Arts, as well as a Bachelor of Science Degree in Law Enforcement Administration from Western Illinois University. Mr. Good is currently an Adjunct Faculty member at a Community College outside the Chicago land area.