The New Era of The Booming 1920s And Its Aftermath

by George A. Schade, Jr. 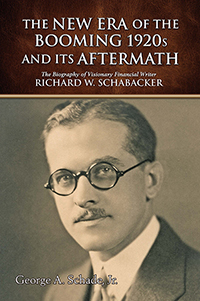 The New Era of The Booming 1920s And Its Aftermath

by George A. Schade, Jr.

George Schade is a meticulous researcher. Throughout this book, Schade brings Richard Schabacker to life and immerses you in the exciting financial events of the 1920s and 1930s. You will gain useful knowledge from Schabacker’s astute observations on markets. George Schade won the Charles H. Dow Award for “outstanding research,” and here you will see why.
–ROBERT R. PRECHTER, JR., Elliott Wave International

The history of technical analysis is vanishing. With each passing a bit of the library burns down. There are a few who are fighting the fires. Chief among them is George Schade, a consummate researcher, whose biography of Richard Schabacker snatches this pioneer’s story from the onslaught of entropy. If you care about the history of technical analysis, and I think every trader and investor should, this work is a must read.
–JOHN A. BOLLINGER, President, Bollinger Capital Management, Inc.

One can only wonder what Richard Schabacker, Princeton graduate, writer, author, distinguished finance editor of Forbes Magazine, teacher, devoted husband and father, might have accomplished had he not died at the young age of 36. Schabacker’s many accomplishments included developing the first stock market “index” and a groundbreaking course in technical analysis. Little has been known about this quiet Wall Street figure that lived through the Roaring 20’s, the Crash of 1929 and the Depression. This is a meticulously researched and lovingly detailed book about a brilliant and complicated man who was “an ardent believer in the efficacy of charts” who felt “no individual can trade intelligently without them.”
–GAIL M. DUDACK, Managing Director Dudack Research Group, a division of Wellington Shields & Co. LLC.

George Schade masterfully tells the unknown story of a market genius. Schabacker comes alive in the pages of this thoroughly researched book. Readers feel the excitement of the market in that long ago era and the market action animates the tale of a life well lived but cut tragically short. This book belongs on the bookshelf of anyone interested in the stock market or anyone seeking an understanding of human nature and how success can hide personal problems until it's too late.
–MICHAEL J. CARR, Senior Editor, Banyan Hill Publishing

Although Richard Schabacker’s life was short-lived, he was a giant in the field of technical analysis, contributing so much to the subject and has left all of us so enriched as a result. His passion and devotion is captured in this very revealing book. His concepts are indelible: market psychology, stages of price/business cycles, sentiment and the combination of value investing with technical timing – they have empowered us.
–RALPH J. ACAMPORA, Director of Technical Research for Altaira, Ltd.

Dick Schabacker entered Princeton as the First World War was ending and graduated in 1921 at the beginning of the Roaring Twenties, a decade of dazzling vitality in arts and literature, social frolicking, economic prosperity, and stock market euphoria in the United States. In the Twenties, he enjoyed the rich experiences available to an Ivy League graduate working in New York City. His career ended amid global deflation and the Great Depression. The social exuberance and economic volatility of the period influenced his views on money and investments. *** His education was top tier and of high level. In 1921, he earned an Economics degree with High Honors from Princeton University. After working for little less than two years at the Federal Reserve Bank of New York, he returned to Princeton for a Master of Arts in English earned in 1924. Schabacker’s formative employment positions were with the Federal Reserve Bank of New York and Standard Statistics Company (now Standard & Poor’s Financial Services LLC) - institutions in their infancy that eventually became dominant in the financial industry. His career peaked as a highly reputable financial writer and editor of Forbes, the magazine of business and finance founded in 1917. Dick Schabacker knew what he wanted to do with his life. He chose to study English because his intended career, as he said and underlined on his application for graduate studies, was “either financial or literary writing.” After earning a master’s degree, he was a financial reporter for the Cleveland Plain Dealer newspaper and then an editor for Standard Statistics. Writing was his bliss. He not only wrote for Forbes Magazine but also composed poetry and submitted features to the leading humor magazines. He made his career in New York City attracted as much to the artistic bohemian lifestyle of Greenwich Village as he was to the comfortable rooms of the fashionable Princeton University Club. *** During ten years at Forbes, he wrote some 440 articles and columns on business, the stock market, investments, and life on Wall Street. He authored two lengthy books on securities trading and stock market analysis and prepared a study course that others later continued and sold as a book. The quantity and scope of published work was substantial. One wonders if he was always writing, researching, thinking, framing, and organizing ideas and stories to share with readers, family, and friends. While investors and speculators profited from his incisive bountiful work, his personal and family life may have suffered. Schabacker elevated the conventions and style of financial writing. His columns and articles were more than opinions or predictions. Keying on a timely industry, with detailed analysis and supporting numbers, he advised readers on what to buy, sell or hold, why, when, and how much. He was a practitioner as well as a thinker. His prolific and influential writings reflect a weighty understanding of the stock market. As Financial Editor of Forbes, he listened to subscribers and created a financial section that met their needs for good information and timely counsel. Even though he was employed, he had a private advisory clientele that was a source of creative ideas and issues to explore. He was an astute investment adviser to readers and clients. 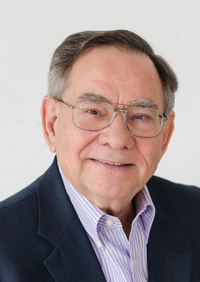 George A. Schade, Jr. has written extensively about the people and innovations that have advanced the technical analysis of financial markets. He has clarified longstanding questions, broadened knowledge of technical factors, debunked myths, and preserved the archival record. His research has appeared in books, professional journals, and financial magazines. In 2013, he received the Charles H. Dow Award that highlights outstanding research in technical analysis, and in 2017 the Service Award of the Chartered Market Technicians Association.