Biodesign Out For A Walk 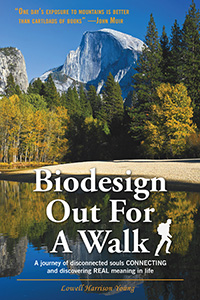 Biodesign Out For A Walk

“What do we believe anyway?”

Going for a walk should be fun. So should studying biology, after all, without it we wouldn’t be alive to experience the rapture, sorrow and mystery of the universe. Biodesign Out For A Walk, is a story of how spirit-sensitive students reprogrammed a left-brained biology teacher and took him on a 24-year odyssey. Following the footsteps of John Muir, they slept on the top of Yosemite’s famous Half Dome. They followed Loren Eiseley and John Wesley Powell to the bottom of Grand Canyon. Ed Ricketts and John Steinbeck led them into forests and tide pools of California’s beautiful Mendocino coast. Abraham Maslow challenged them to redefine science and religion. Ralph Emerson challenged them to write their own Bibles. They traced the origins of human spirituality back 100,000 years. The class was dedicated to studying biology by exercising the illimitable freedom of the human mind. Plato urged them to actively search for truth, beauty and goodness. They studied the works of scientists, sages, poets and saints to add to their growing concept of Mother Nature. Many synchronicities were discovered that were either playful, mysterious or scary. Socrates’, “The unexamined life is not worth living,” and Thoreau’s, “I went to the woods to live deliberately,” became mottos. Although each class lasted one academic year, the teacher was guided by students for 24 years and his adventure ended when a modern-day Moses mysteriously met him on top of Half Dome. 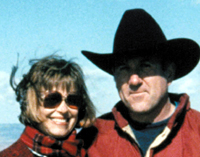 Lowell Young and his wife Christie have lived in California’s Napa Valley for over 40 years. Mr. Young taught high school biology for nearly 40 years before he retired. The class that evolved into Biodesign was a creative, collaborative project where the roles of teacher and student were often reversed. It was well known by the students that although Mr. Young represented the physical nature of the class, Christie’s silent spiritual guidance was often felt in their classroom circles, as well as along the many miles of trails they walked. The Biodesign class may be the only one of its kind taught in a public high school in the country. The author can be contacted at: biodesignoutforawalk@gmail.com www.facebook.com/biodesignoutforawalk