Affairs of Another American Revolution

A World of Affairs Novel 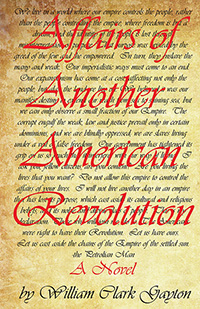 Affairs of Another American Revolution

A World of Affairs Novel

The Petrolian Man brings the British Empire to its knees, entangling a General, a Slave, and Sky-Captains, in the Affairs of Another American Revolution.

The American Revolution failed. Great Britain is in the Industrial era, and has consolidated its rule by taking to the air with its airships.

However, British influence is being thwarted by the affairs of the colonial resistance led by an ambitious general, a rivalry within the British Imperial Naval SkyFleet, slave revolts ignited by the empire’s most barbaric experiment, a Sky-Captain's family, the Petrolian Man's quarrel with society, and an untimely dispute with an industrialized Asia.

An uncultured and godforsaken Imperial Society is on a downward spiral along with civilization itself.

Silas approached the Admiral as calmly as he could; the man was a war-hero after all.

Admiral Horatio Nelson was the Grand Admiral of the British Imperial Navy.

Heroism was written all over him, especially his blind eye, irreparably damaged fourteen years ago, and his missing right arm, replaced with a metal covering. Six years ago he’d led and won a decisive victory against the Spanish and French, and still to this day he was most celebrated.

Nelson took sight of him. He motioned for his aide to leave.

Silas stood toe to toe with the Grand-Admiral and he sa- luted the war-hero.

“Captain Silas Ryders. Your grandfather has told me all about you, and your ‘special’ request.” Nelson spoke as if he were a king.

Silas smiled, “It is my wish to serve at sea.”

“Why not the sky? Where’s your grandfather? Now he’s the one you should be talking to; it’s the sky where you’re needed. We have plenty of sea-men.” Nelson asked as he looked around for the Sky-Marshal. “From your reports, it seems you passed your tests at the Academy; you are fully qualified for flight?”

Silas hesitated before answering. “I am afraid of heights.”

The Admiral stopped and dropped his glass; he turned his one good eye and stared it straight into Silas’ soul.

Nelson pulled out a handkerchief and slapped Silas across the face.

“I have sea-sickness, yet I’m an Admiral in the Imperial Navy.”

Silas was taken aback, unprepared for what had just happened.

“The bravest man feels an anxiety, ‘circa praecordia,’ as he enters the battle; but he dreads disgrace more,” Nelson jeeringly announced.

“Do you want to be a disgrace to your family’s name by turning away from your duty to country? Or do you want to be a man and serve England as you should? Victory or West- minster, young Ryders?” Nelson shouted in Silas’ face.

Nelson’s way of a motivational speech.

Many guests were but bystanders, oblivious to what had just transpired.

“There was an accident on one of my training sessions. We lost a few good friends,” Silas’ voice grew solemn.

The Admiral replied, “I know. I read your dissertation. Conard, Felix, Bonner; their fathers still remain the proud people they are. Nevertheless, you survived and went on to finish the test, and are indeed qualified to be a Sky-Captain if you ever so choose. Desperate affairs require desperate measures, and yet you prevailed.”

“Thank you, but no thank you,” Silas refused.

Nothing would change the boy’s mind. Those names scarred him for life. Young Ryders would never forget them; they were the best of friends and they’d introduced him to Rachel.

“You should not let one moment define your life, and your duty to Empire and Country, boy. If I let one battle decide the fate of my career I would be at the bottom of the Strait of Gibraltar now. Or that man Walcott wouldnt have survived the one versus three encounter,” Nelson rabbled on.

Silas could not help but roll his eyes at the mention of Walcott. The fabled Legendary pilot who was outnumbered and outgunned, took on three British airships and survived at Cape Cod, during the Petrolian Succession.

He couldn't believe that an admiral believed in this story, this fable that encouraged the acts of a criminal. But it was used as an achievement that airship pilot should strive for.

Nelson paused for another swig of his drink.

“Losing one eye and an arm will not keep me from my duty. For I am Admiral Nelson, and here’s my fin.”

The Admiral waved his short arm around, like a trophy.

Silas saluted the Admiral, not knowing how to respond to such actions.

Nelson saw that it was useless to fight with the boy.

There was some disappointment in the Admiral’s voice.

“I’ll see you in the Mediterranean soon. We've got Napoleon to splice his armies, and we will regain Egypt by December.”

As Silas turned to leave, Nelson grabbed him by the arm.

“There are three things, young man, which you are to constantly bear in mind. Firstly, you must always implicitly obey orders, without attempting to form any opinion of your own respecting their propriety. Secondly, you must consider every man your enemy who speaks ill of the Empire; and thirdly, you must hate a Frenchman as you do the devil.”

Young Ryders nodded, still unsure of how to respond.

“Well, dear boy, the main event is about to occur.”

Silas stepped aside and saluted Nelson.

“Thank you for your time, Admiral Nelson.”

William Clark Gayton was born in the Philippines on August 6, 1994. He is the son of William Anthony and Hildegarde Gayton. Since 1995, he was raised and is currently residing in Jacksonville, North Carolina. Other than writing his hobbies include Piano, Chess, Video Games, listening to Music, Tennis, watching movies and reading books, and hanging out with his friends. Star Wars is the most influential story to his work. He has recently graduated from Northside High School, and is currently attending college to get a Creative Writing degree.

Goodreads reviews for Affairs of Another American Revolution