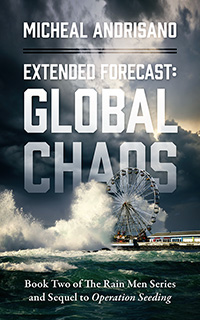 Cloudy With a Chance of Conspiracy

The anti-climate control lobbies are having a field day, their accusations shrieking from the headline of every newspaper, worldwide. It is now accepted as fact that HT Wetco had flown under the radar to single-handedly sabotage the weather around the entire planet. As the repercussions of climate interference spiral out of control, with economies and living conditions impacted around the globe, the trial of the century unfolds. As their largest man made storm Hurricane Susan is bearing down to strike along the eastern seaboard, coincidence, or a deliberate sabotage effort perpetrated by HT Wetco, with the blessings of the US government. As this extreme weather event begins Chinese General Ly N Ming and his men begin their attack in Lorton, Virginia. While unbeknownst to many a former Russian KGB agent, Günter and the Muslim Brotherhood now plot to bring nuclear destruction to America. While Luther and Juan travel From Moscow to Madagascar seeking the whereabouts of the madman Günter. In America Clara, Brad and a new ally Joan Romanski of the Russkaya Mafiya seek the information they need in helping stop the attack. In the center of it all is Todd Thurston grandson and now CEO of HT Wetco. His allies confident in their knowledge that whoever controls the weather will also control the world. A deftly plotted thriller showing you a world that modern technology has created, Extended Forecast: Global Chaos is the second book in the compelling trilogy that began with Operation Seeding, which now has a following around the world. Operation Seeding will be published in an updated edition to coincide with the release of Global Chaos.

Mike Andrisano is retired. He lives in New Jersey with his wife. He has two children and five grandchildren. Email Mike at mjasr@earthlink.net or Web Page is http:www.micheal-andrisano-sr.com 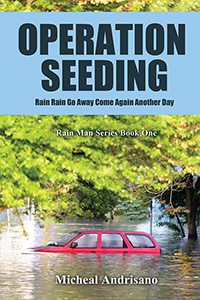 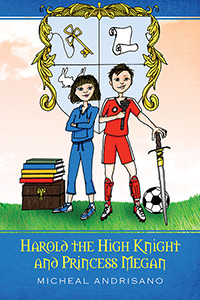