A Rage In Winter 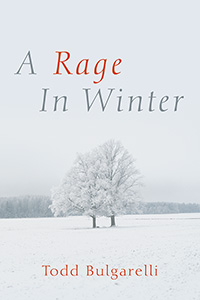 A Rage In Winter

In a small town on the shore of Lake Michigan, two young women are enrolled at the local college—a school comfortable only with the traditions of the past. One of the students adheres to the institution’s Calvinist foundational roots; the other is Catholic, struggling to maintain her identity in an insular community leery of outside influences. But a man they both desire soon comes between the two friends, and one of the women hatches a horrific plot against her rival—a plot to take place against the backdrop of a frigid Michigan winter. Thus unfolds A Rage in Winter, a novel exploring the nature of jealousy and hatred, the origins of evil, and the consequences of violence in an environment of religious intolerance and a fear of the wider world. The novel chronicles the journey of a young woman, outspoken in her beliefs, who finds love where she doesn’t expect it, experiencing the wonder of a new, uninhibited passion, while, simultaneously, an old friendship dies—replaced by vengeance. As the cold snows of winter approach, the two women face each other, an unspeakable crime is committed, and a community is left to ponder the aftermath of an event no one thought possible in a place so sheltered from the outside world. Todd Bulgarelli paints a vivid picture of a small town rocked by a big-city crime in A Rage in Winter, a novel that is both engaging and thoughtful.

Todd Bulgarelli was born and raised in Michigan, and holds a bachelor’s degree in history from Hope College. In his free time he enjoys reading and writing, listening to music, and spending time outside, finding inspiration in the changing seasons of his home state.