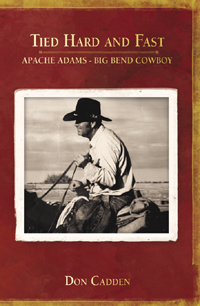 Apache Adams is somewhat of a living legend out in the Big Bend country of Texas. Born in 1937 and raised on the Rio Grande, he has lived the cowboy life most people believe ended in the 1800’s. He has been inducted into the Big Bend Cowboy Hall of Fame, given the Working Cowboy Award by the National Cowboy Symposium, the Heritage Award by the Texas Cowboy Poetry Gathering, and won more buckles and saddles than he can count. But this book isn’t about awards or buckles; it’s about the life and adventures of a working cowboy. Ride along with Apache through the desolate canyons of the Big Bend and swim the Rio Grande horseback tracking cow thieves. Ride the river catching illegal Mexican cattle. Take a deep seat in your saddle when you rope a 2,000 pound maverick bull, get him to the ground, and tie his feet without any help. Tied Hard and Fast isn’t a bunch of tall tales. It is the compilation of a lifetime of stories and adventures told in the voice of the man who lived them. “We followed the dogs up into a big rock slide, and they had about a 70- to 80-pound female mountain lion treed on a big rock. The dogs had her surrounded, but none of us had any kind of a gun. So I jerked my rope down and just kinda pitched it at the lion on that rock. She swatted at the rope, and I pulled it up tight around her front paw. The mule I was riding was pretty green and, when the cat started throwing a fit with the rope on her paw, decided to take off. I jerked the lion off the rock, and then the dogs all jumped on the lion. So I was dragging a lion around in circles with a bunch of dogs chewing on her, and she was putting up a pretty good fight with three legs.” Along with living these stories, Apache has shared them with audiences at the Texas Cowboy Poetry Gathering, the Arizona Cowboy Poet’s Gathering, the Ruidosa New Mexico Gathering, and other events across the west. Once you pick this book up, you’ll say, “I’ll just read one more story and then put it down for the night”...but you can’t!

“In our leggings’ pockets we’d each stashed guns. I’d packed a .357 magnum pistol, and José had a .22 pistol. When we got close to the wax camp, José said he thought they would have a trap set for us, and we’d be outnumbered. We both agreed that the best thing we could do was to keep our mouths shut under the circumstances. We rode into the camp, and Casus, the man I figured stole the cow, had a little fire going and had coffee ready and some tacos made. He invited us off our horses, and I noticed a .30-.30 rifle sitting pretty close to his hand.”

Don Cadden lives with his wife Pam Cook on their small place south of Alpine, Texas. They run a few cows, and Don day works on various ranches in the area. Since 1990, Don has performed his music and poetry at cowboy gatherings around the west. Born in Gonzales, Texas in 1946, Don grew up in the rural community of Del Valle. He graduated from Southwest Texas State University, served in the military, and spent most of his adult life in the Austin and Dripping Springs area. He also spent a lot of time in the brush country of South Texas around Cotulla, and in the Big Bend area of West Texas before finally settling there. Don and Pam have four grown children and two grandchildren. 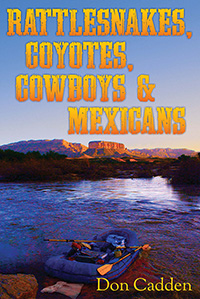