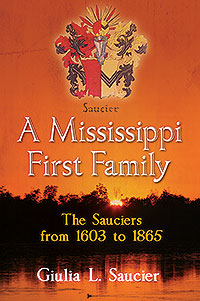 The story of the Sauciers is that of the struggles of ordinary French men and women who, transcending difficulties to raise families in an unforgiving environment, undergirded the establishment of both La Nouvelle France and La Louisiane. Their story begins with Charles Saucier, organist to Louis XIV, King of France. His son, Louis Charles, sailed to the wilds of Canada in 1665 where he sired a new branch of the family. Louis Charles’ younger son, Jean Baptiste Saucier, one of sixty Canadians under the leadership of Pierre le Moyne, Sieur d’Iberville, founder of La Louisiane, arrived on the Mississippi Gulf Coast in 1699 to help establish the French there ahead of the hated British. In 1704 Jean Baptiste married Gabrielle Savary, one of the Pelican Girls, sent by King Louis to wed the Canadians. Together they became pillars of Colonial Mobile and started another branch of the family whose descendants would settle along the Mississippi Gulf Coast and in Alabama, Louisiana, Illinois and Missouri. While A Mississippi First Family is about the Sauciers and their descendants, in a larger sense it is about all those who have left a known world behind to make a life for themselves in an unknown world. Though it includes the decisions and actions of those at the top of French society, its focus is on the ordinary men and women of France who came to these shores. By examining the record of this one family in the context of their times, not only are their lives revealed, but the lives of those who helped form the history of the Gulf South and beyond. 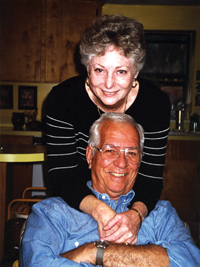 Stories told by her husband, Gene Saucier, of his French relatives and their way of life in Mississippi in the early 1800s, tales handed down to him by his father, piqued the author’s interest in the history of this family. Their story, though dug out from a bare fact here and a tantalizing comment there from the historical record, is based on wide-ranging research. Though sadly the lives of ordinary people go unrecorded, this lack does not discount their importance for it is in their lives that the heart and soul of a nation can be found. Giulia L. Saucier is a graduate of Florida State University, Smith College, and the University of Southern Mississippi, where she earned her Ph.D. She lives on a tree farm in Hattiesburg, Mississippi, with her husband whose French ancestors arrived to settle on the Mississippi Gulf Coast in 1699.