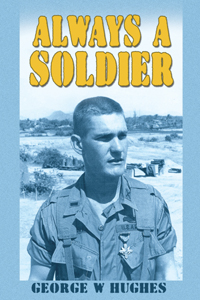 AN INSPIRING JOURNEY OF

reinforce his fellow soldiers in a Vietnam village. Under fire for more than four

hours, he had a decision to make: maintain a tight position with his men grouped

together, or disperse them and return enemy fire.

Service Cross. But they truly formed over the previous three decades, as Hughes

inspiration to us all.

spans his impoverished early years during World War II, his initial enlistment in

the Army at 17, the formative experiences in training and combat, passage

into manhood and the growth of a family. It is a book about courage and

succeeding even when you think you can't, and serving others when most think

only of serving themselves. It is, above all, a humorous and honest portrait of

a life fully lived, one that proudly retells the good times while not flinching from

When the mortars began to fall, I hid behind a tombstone in a Vietnamese graveyard. I yelled "Where is Sergeant Darby?". He said "Here I am". He was hiding on the other side of the tombstone and I had to laugh because one of us was hiding on the wrong side.

in the United States, Germany, France and Vietnam. He

spent eight years in the Army Corps of Engineers and 12

years as an officer in the Army Infantry.

While in the Army, Maj. Hughes earned a college degree in

business administration from the University of Tampa.

He is retired and enjoys spending time with his wife,

He lives in Gahanna, Ohio.