Life Against All Odds 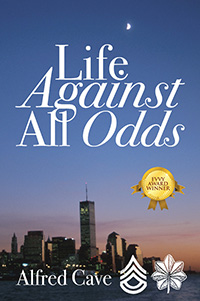 Life Against All Odds

The Revealing Portrait of an African American Success Story

Before he was in his teens, Alfred Cave was already an orphan, a runaway, and a homeless person on the mean streets of New York. Five decades later, he would retire after heading the nation's largest supported work program, as well as his own successful federal contracting company. This amazing story is recounted in Against All Odds, a stirring account of Cave's surviving and thriving despite all life could throw at him.

A wide-ranging yet intimate memoir, Against All Odds follows Cave beginning with his earliest recollections in a violently racist South. But the deep-seated attitudes there don't disappear when he escapes to the North and, later, the U.S. Army. Cave brings readers along for the ride as he rises to a Major, commanding two battalions and receiving a Bronze Star. It's a revealing glimpse into an ambitious African American soldier's unique experiences navigating the military's hesitantly integrated ranks, and the challenges of raising a family along the way. As he returns to the private sector, Cave continues to document an engrossing cast of characters - some endearing, others maddening - that readers won't soon forget.

Alfred Cave was born in Jacksonville, Florida, in 1930. In addition to a successful military and private-sector career, he is a former volunteer president of Community Access, a nonprofit advocacy group for mentally ill homeless people. Cave has three children, two stepchildren and one adopted son, who is currently the U.S. Ambassador to the Marshall Islands.