Africa: The Legacy of Civilization 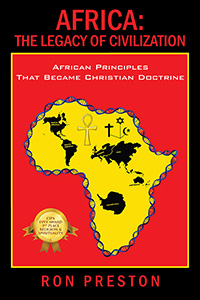 Africa: The Legacy of Civilization

Fact: What you believe is Hebrew is African!

“Wisdom is the principal thing; therefore get wisdom: and with all thy getting get understanding.” Proverbs 4:7. The author invites you into the wisdom of the legacy of Africa that provided the principles that key biblical scriptures were developed from. The principle used to create the concept of the tree of the knowledge of good and evil is revealed. He exposes you to a conversation held in a vision of an African ancestor with God. In the vision God entrusted him with a tool of great wisdom that if used could guide humanity to a more peaceful coexistence than history has recorded. It is a tool that still has the power to avert bloodshed in our present day and certainly in our future. The legacy of Africa is also an incredible source of human inspiration and should be a source of great pride. Drawing from the will and spiritual strength of African ancestors, generations of their offspring survived slavery, apartheid and colonialism. The author delves deep into places in history where man has shown grave inhumanity to man. The evils man has exhibited could have been prevented if God’s tool of wisdom given to an African in a vision had been employed. You will understand the value of this tool as you realize how appropriate its use would be in our world of politics and globalization. What humanity is lacking God had already provided.

From the fullness of a mother’s womb there has never been born a Christian, a Muslim, a Jew, a Hindu, a Buddhist, a Democrat, a Republican, a Conservative, a Liberal or any other artificial identity we claim and allow to dominate and supersede our natural identity as human beings. I am sure there may be some who take exception to the idea that religious belief is an artificial identity. But I ask you, can you change your religion? Yes. You can change your religion, political persuasion, philosophy and any other influences in your life but you can’t change the fact that you were born and presently are and will be until you die a human being. This is the immutable truth that makes it clear that every other influence with which we identify ourselves is artificial. Human history is filled with the spilled blood of wars motivated by the artificial identities humans take on in religion and politics. When you look into the eyes of another human being and all you see is what your religious dogma has implanted in your mind that judges that person, you have failed yourself and humanity. The same is true of your political identity: if you only see in another human being a political comrade or opponent you have failed yourself and humanity.

Ron Preston sees himself as a human being by Godly design, an African by ethnic origin and an American by birth place. What makes this combination unique are his perceptions of it. Life’s experiences, in depth studies and observations became the compelling catalyst of this work he titled; “Africa: The Legacy of Civilization.” His specific interest is rooting out falsehoods and exposing truth in a way that would impact the world with positive and lasting change. He was born in Mobile, Alabama, grew up in South Bend, Indiana, after military service he lived in Colorado Springs, Colorado, has travelled to Africa, and resides in Taylors, South Carolina for over 25 years.