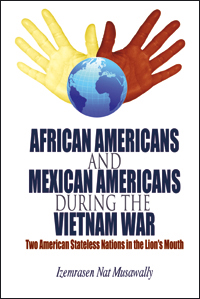 Universal peace and justice depend upon the attainment of a humanistic, democratic, rationalistic and secular global integration through the immediate protection and ultimate liberation of all the subjected and endangered peoples of the world.

At a time when the African-American and Mexican-American peoples were demanding their share in the American economic and political life, the U.S. government’s criminal and racist response to their deep-rooted and long-lasting grievances consisted, among other things, in creating a “direct [deadly] conduit from the barrios and ghettoes” to the battlefields of Vietnam. The conservative American governing upper-class managed to shape the Selective Service law so as to stifle these despised ethnic minorities, who dared to overtly ask for their individuals’ and peoples’ rights, by sending a disproportionately large number of their draft-age men to die in the jungles of Vietnam. By doing so, the U.S. government displaced the violent class and racial conflict into the battlefields of Southeast Asia. Indeed, while African Americans and Chicanos succeeded to show the grave shortcomings of the U.S. system of government, the Vietnam War was used by the U.S. supremacist ruling upper-class to divert public attention from the serious political and economic issues raised by the integrationist and nationalist leaders of both ethnic minorities in such a way as to prevent them from getting access to the privileges of the wealthy American society.

N.B. The book ends with a postscript that deals with the controversial Iraq War and the long-lasting despotic Arab/Islamic tyranny in both the Middle East that is ethnically non-Arab and Amazigh North Africa. The postscript focuses, as well, on the righteous struggle of democratic secular Kabylia—a Western Mediterranean Amazigh nation—for self-determination to free itself from the totalitarian, enslaving and genocidal Arab-Islamic domination embodied by the thug regime of Algiers.

Izemrasen Nat Musawally holds a Master’s degree in American Studies. He has worked as an English language teacher in Kabylia, France, and Japan. Izemrasen has over 10 years of teaching experience at all levels, from elementary to university. He has also served as a freelance reporter for French newspapers in Kabylia.