The Story of the Wilbur-Cruce Horses 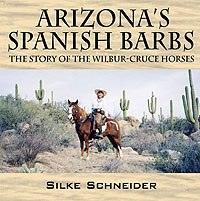 The Story of the Wilbur-Cruce Horses

A Living Legend of the American Southwest

In the late 1600s Jesuit missionary and explorer Father Eusebio Kino established a herd of Spanish horses along with cattle and other livestock at Mission Dolores, Mexico, to supply the expanding settlements of the Pimeria Alta region. In the 1870s, according to family history, Dr. Wilbur, an early homesteader near the town of Arivaca, Arizona, purchased a group of these mission horses. These became the foundation stock of the Wilbur-Cruce rancher strain of the Spanish Barb breed.
Dr. Wilbur's granddaughter, Eva Antonia Wilbur-Cruce, preserved this isolated herd through much adversity until she sold her family ranch in 1989 to The Nature Conservancy to be included in the Buenos Aires National Wildlife Refuge.
Fortunately the American Livestock Breeds Conservancy became involved. Blood typing and visual inspection supported the oral history and resulted in the rescue of the herd.
Today Eva's "rock horses," as she fondly called them - noting their ability to negotiate very difficult, rocky, mountainous country with skill and ease - are preserved in several Western states.
In 2005 the Wilbur-Cruce horses were formally accepted as the sixth foundation strain of the Spanish Barb.
Today the Wilbur-Cruce Spanish Barbs are highly prized for their extraordinary hardiness, sure footedness and strong bond with 'their' people. 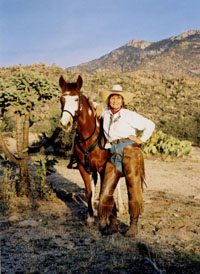 Silke Schneider left home in Germany, barely out of high school, in the late 1970s, with 90 horses, 20 elephants, numerous tigers and lions, dogs and other animals. - How? She ran off with a traveling circus. Life has been an adventure ever since, and a lot of time a 'circus' of various kinds. She is a full member of the Long Riders' Guild and in 2004 she was elected a Fellow of the Royal Geographical Society in London. She now lives in her beloved Arizona and New Mexico, where she shares her life with botanist partner Richard Felger, numerous animals and plants.