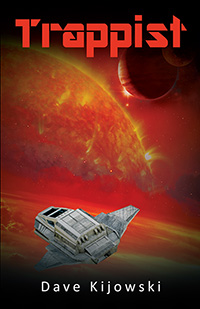 Ever since his young protégé Dr. Shamir died in a dreadful space explosion, Doc Murphy has been hounded, beaten, abducted and his family held hostage by a hostile government. Confused with inexplicable musings from his past, he struggles to keep pace with the powerful disruptions to his once peaceful life. Racing from one calamity to another, he teams up with a smuggler fresh out of jail, a humorless old man, and a Space Agency operative to track a cryptic signal beacon from beyond settled space. Pursuing a course that stretches human ingenuity to the limit, Doc must push himself to the brink, risking his life in a battle against time to uncover the mystery of Dr. Shamir’s death.

Inside
The commander stated, "Mr. Brady is a key member of the crew, he is the person that actually built the sled, he knows all the components in the propulsion system. He did the programing; he knows how it works. If something went wrong out there, there would be no way to fix it. The other crew may be able to eventually figure it out but how long would it take? The only person that knows all the programing in the system chip and accelerator boards and symmetry programs is Mr. Brady. We are studying it but it will take days to get up to speed, we are at eight days now, I am afraid it would put Josh's chances of survival near impossible without food, water, and oxygen even with reprocessing."
Without thinking, Doc blurted out, "I know those systems," then stopped and felt his stomach tighten up, realizing what he had just done.  Looking around the table he saw all eyes on him.

Josh's fuel level was dropping fast.  Randy had to be aware of this when he commented over the comm,  "Hey Josh, you're not going to make it back to the station, but don't worry, I'll send out a tow. I hear the Agency has plenty in the area." Josh knew that Randy was pushing on the thrust to the fullest to keep ahead of him.
Josh simply responded, "Thanks, I appreciate your concern."
At that second, Randy's Party racer was just off to Josh's right and the bloom of its engines filled the screens there.
Randy couldn't believe it. "Are you nuts? Screw you!" His alarm sounded and he threw on the retros hard.
Randy yelled into the com, "Josh, pull up, man, pull up, you're too close."
It was a matter of seconds, Josh counted them off to calculate the lead he would need to be ahead of Randy out of this trench leg of the race. He pulled his respirator off the bottom of his helmet and at the same time he blasted his retros.   His eyes turned white up into his upper sockets, his stomach emptied out his mouth and nose and he continued to heave while straining to see his forward screen.
He listened to the sound of the computer alarm blaring and counting off the distance to Moon impact. His blood was being equalized in his suit, but he needed it to happen faster.  Suddenly he was back and his eyes locked back on the screen. He twisted the retro angle and the vector to the trench entry marker. He had only seconds to react before he'd hit the marker. He popped the retro on and off, still almost plummeting in a death spiral to the surface. Blaring warnings sounded in his helmet and throughout his small racer.
He could hear Randy yelling in his head phone, "Josh! Pull up! Pull up! God! God! Shit! Shit! Shit! Pull up!"
Josh plunged down with the Moon now filling all the visuals and him trying to maintain his high rate of speed.  He twisted the retro hard again. His eye did not pop this time but some more gunk came out of his mouth and he turned and spit the drool onto the side screen. He pulled up on the bar and fired the main engine and lowered maneuvering thrusters at the same time. It changed his angle slightly as he passed just over the edge of a mountain peak about 1000 klicks in front of the canyon entrance.  He needed to expend more fuel to pull out of the dive and he felt his fear and a slight panic start to grip his throat.  His pumping adrenaline drove him to the limit. He shut off the thruster and diverted all the power to the lower maneuvering thrusters. He was still moving at incredible illegal speeds toward the surface but at a better angle than an instant death spiral.  He was planning it out at lightning speed. He would make it. He also knew he wasn't finished and the race wasn't close to being over. In his wake, Moon dust marked his path on a direct vector to the trench. He set back into racing mode and checked on his friend, Randy. Even before he could check the visuals, he heard Randy's voice, "You stupid crap head, you're a full on a-hole, you could have killed yourself, what the heck are you doing today, Josh?"
On the tracking screen he saw that he'd gotten a twenty second lead over Randy.
Randy, almost reading his thoughts, said, "Twenty seconds is not enough Slick, I'll pass you in the trench."
"You're on, and thanks for your concern."
Randy said, "Yeah, well, you're nuts."
Josh was into the trench and his momentum was still with him; he would need to lower his speed substantially and use a lot of thrusting retros to get through the trench. The rules in the trench were no flying above the rim and no dying or crashing because the race sponsors can't afford to look for someone that is already dead.

Originally from Western Pennsylvania, Mr. Kijowski grew up in the small town of Kittanning, Pa.  He graduated from Kittanning Senior High and then he crossed the state to Philadelphia for college and attended Temple University for his undergraduate degree.  He then returned to Western Pennsylvania and attended the University of Pittsburgh for his Masters.  Shortly after graduating from Pitt, he moved to San Diego, CA. USA. and currently lives there with his wife and son.