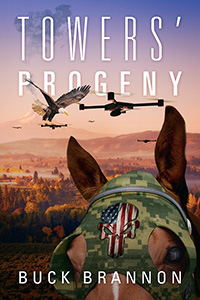 TOWERS’ PROGENY Dr. Rob Becker will also be your guide in the second novel of the TOWERS trilogy. Prior to his wife’s kidnapping, all was right in Rob’s world. Towers Above had retired to stud and Rob’s dream of producing another “Secretariat” had come true. However Rob’s CIA operative friend—Tommy, couldn’t let go of some gnawing financial questions concerning a farmhand that had cared for “T.A.”. While investigating the death of “T.A.’s” former groom and his new-found wealth in a South American country. Tommy unwound the web of deceit surrounding Rob’s silent partner Mark and his involvement within one of America’s darkest intelligence agencies. Rob knew that he was once again putting his marriage at risk, but he couldn’t help it. It didn’t take long before Marty discovered Rob’s deceit. His continued lies resulted in Marty moving in with her sister in Portland, Oregon. Distraught and panicked, Rob called Tommy, who had information that only added to Rob’s fears. Antifa terrorists in Portland were kidnapping wealthy individuals and demanding enormous ransoms from the kidnapped victim’s families. Tommy tells Rob that Marty fits the kidnapper’s profile. Tommy’s intel proves to be right. Within days, Marty is kidnapped. The search for her takes Rob and Tommy on trails surrounding Mt. Hood, where Antifa’s secret hideout was thought to be. The home-grown anarchists, believed to be made up of mostly entitled dissatisfied Millenials, were no strangers to death and destruction and had embarked on a journey to cause both. Weapons of mass destruction had previously been stolen by Antifa followers and their use was now a threat to the well-being of thousands of innocents in Portland. Together with American military forces, the CIA, Homeland Security and other government anti-terrorism agencies, Tommy and Rob set off on their separate perilous journeys. Was it destiny or determination that kept Rob and Tommy together in circumstances of natural and terrorism-driven danger and death. As events in Portland escalate, both men would personally experience devastating loss and sorrow during the defeat of Antifa’s short-lived revolution.