THE SHADOW OF SACRIFICE 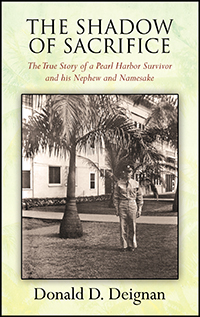 THE SHADOW OF SACRIFICE

After Pearl Harbor, Life and Honor Outlasted War and Death!

On March 18, 1942, barely one hundred days after Japan’s devastating “surprise attack” on the United States Navy’s Pacific Fleet based at Pearl Harbor, a group of American soldiers were guarding a beach on the north shore of the Hawaiian island of Oahu against an expected Japanese amphibious invasion. The atmosphere was tense. Suddenly, a gunshot shattered the almost perfect silence of that tropical night. In its aftermath, one young American soldier lay dead not far from the beach he was guarding. But who was he? And what were the circumstances which had led to his tragic death? The Shadow of Sacrifice answers these questions and, in the process, tells the compelling and poignant story of the way in which that single gunshot has echoed down through the generations of one typical American family. Here is a mystery, a tragedy, a kind of love-story, a tale of survival and transformation, and the unfolding record of promises made and kept. The young American soldier who died mysteriously on that Hawaiian beach in 1942 was my beloved uncle, Private First Class Donald Joseph John Deignan, for whom I was proudly named. Our lives have always been closely and positively connected. Here, just in time for the 75th Anniversary of the Pearl Harbor Attack, is a thorough examination of the unbreakable and mutually beneficial bonds of love and loyalty which still unite us today. Veterans and their families, Baby-boomers, immigrants and people with disabilities will all find themselves reflected in our particular story.

Donald D. Deignan received his Ph.D., in History, from Brown University. Physically disabled himself, Deignan is a Disability Rights advocate. His father, and five uncles, including Donald Joseph, served in World War II. A holder of Irish and American Citizenship, Donald lives in Providence, Rhode Island with his wife Kathy.