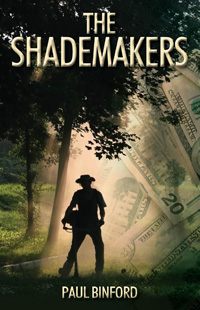 ..The Shademakers is a bit of the Steinbeck, Grapes of Wrath era brought to the modern day. The fast-moving storyline is of the young main character who makes his way across the country with migrant workers planting trees. A sense of freedom is shown in the story as well as the idea of how choices play a part in life. Learning about a different lifestyle and being engrossed with unique characters and their scenic surroundings will keep the reader turning the pages.

By taking back roads, we skirted to the south of Yellowstone National Park and drove straight across the Teton Range. Giant peaks, bare with deep snow-filled gorges, thrust up by a collision of tectonic plates millions of years ago, resembled the teeth of a saw blade. The almost vertical mountains were punctuated by valleys of green alpine meadows, splashed with outpourings of red Indian paintbrush, purple lupine, yellow Spanish broom. The mixed forest of aspen, fir, pine, and spruce filled the crevices in the foothills and spilled down to the banks of swift streams. On the down slope of the Tetons, again we met with the Snake River, near the headwaters of white rapids that a thousand twisted miles downstream would finally meet with the Columbia. We saw wildlife, white-tailed deer leaping over fallen logs as we followed the streambeds, a moose standing knee deep in a wet confluence of glacier runoff, a family of bighorn sheep angling across a precipice.

As we approached Jackson our slow-moving rig caught up with even slower-moving vehicles, the early vacationers in their motor homes and campers. The traffic slowed to a near stop in the center of town, where a curious mix of humanity strolled in a park square bordered by high arches made of elk antlers. The locals—wearing wide-brimmed straw cowboy hats, pearl-buttoned western shirts, and Levi’s—mingled with tourists who pointed their cameras at the elk horn arches. The men wore flowered short-sleeved shirts tucked into white duck trousers; the women wore sleeveless shifts in spite of the chill in the air. Children stared at the cowboys, the new generation meeting the remnants of another time.

We looked for the Forest Service district office where we would meet Rio that day, and learned there was no district office. Jackson is the supervisory headquarters for the six districts surrounding the town. We found a two-story salmon pink building that, along with the parking lot in front, filled the entire block. Dark green awnings shaded the windows, white cast-iron railings lined the second-floor verandas, and a carport set in the corner of the first floor was reserved for the supervisor. We parked at the back of the lot and separated, scouting in five directions for Rio’s pickup. The sun lowered to the peaks in the west, a late afternoon sun that soon would be a halo surrounding the granite saw teeth. Not finding Rio or his pickup, we left a note on our windshield. We would wait in a saloon on the next block. 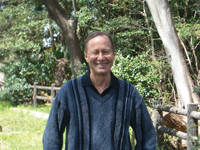 Paul Binford spent his early adult years hitchhiking, hopping freight trains, and driving beat-up old cars around the United States. Among his adventures was a stint with a reforestation company, on which The Shademakers is based. Originally from the Los Angeles area, he’s now living in Japan with his wife, Yoko, two dachshunds, and a relatively content community of expatriates.