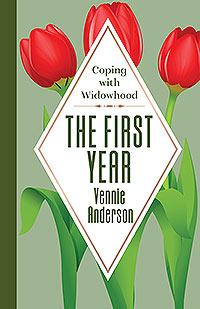 One woman’s journey through grief after devastating loss

In December 1997, after a brief illness, my husband, Wendell, died at the age of fifty-four. Caught off guard, I was faced with intense grief that threatened to overwhelm me. Desperate for a way to relieve the unrelenting pain, four weeks after Wendell’s death I turned to a blank journal someone had given me. I poured my feelings onto its pages without regard for punctuation or style. I didn’t write every day, just when I felt the need. I wrote about my pain, wrote a few poems, and even wrote letters to my husband, letters I knew he’d never read but that I felt compelled to write. After a time I found that putting my feelings on paper actually did provide some comfort. Without planning, I wrote the last journal page on December 24, 1998, a year and a day from the day Wendell died. In the years that followed I reread the journal many times, noting with each reading how far I’d come in my journey of grief resolution and healing. After the most recent reading, I decided it was time to share the journal, in hopes that others facing grief may derive some comfort from my experience.

You are not going crazy. You are not alone. There is light at the end of the dark tunnel.

This is not a how-to book. It is a book to be read and reread, underlining passages and writing notes in the margins.

Vennie (nee Jones) Anderson was born and raised in Herrin, Illinois. She graduated from the Lutheran Hospital School of Nursing in 1967. She earned a bachelor of arts degree from Eastern Illinois University, a master’s degree in health education from Southern Illinois University, and a bachelor’s in nursing degree from McKendree College. Her nursing career included working in a variety of healthcare settings, but patient education was always nearest and dearest to her heart. She developed and wrote a number of educational materials for use in hospitals. She spent the final thirteen years of her nursing career working for the Department of Veterans Affairs Medical Center in Marion, Illinois. At the Marion VA she received an award for Excellence in Nursing. After retirement she traveled extensively, including trips to China, Thailand, Australia, Europe, Scandinavia, Russia, and Antarctica. She has one daughter, Kim, from her first marriage in 1967 to Jack Wiggins. Anderson currently resides in Crestview, Florida, with her two cats, Charlie and Tinker, whom she says kept her sane during the crazy year of 2020.